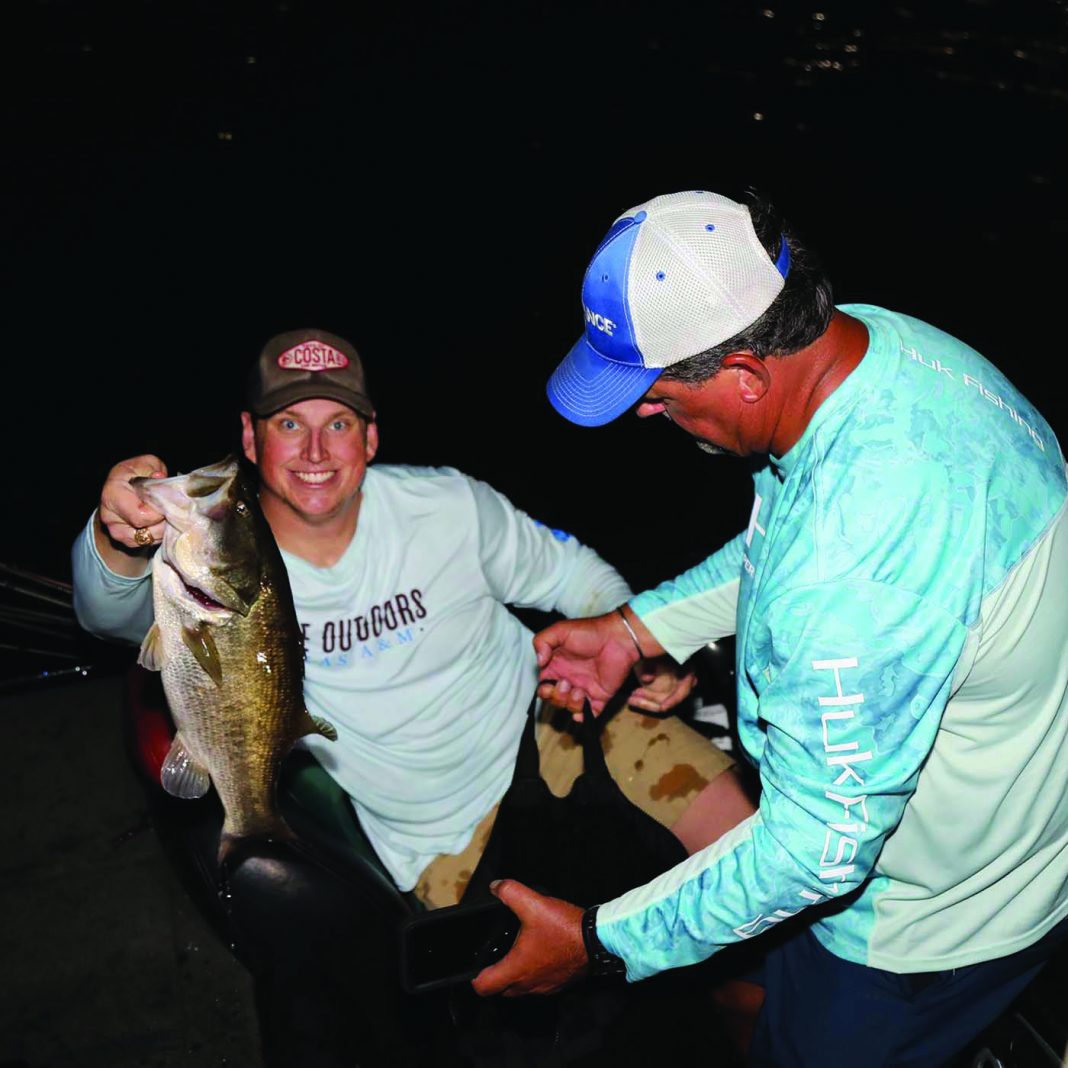 Today Trey and I went wade fishing at Galveston.  We waded the flats and fished with swimbaits.  We caught a lot of redfish.

Today Jeremy asked if I wanted to compete in the Tuesday Night Tournament on Lake Conroe.  It was a hot 99 degrees when the tournament started at 5:45 at the Edge Restaurant on Lake Conroe.  We were #25 and are weighing in at 9:15 p.m.  That is the second flight.  John Jay, Grant’s fishing partner from A&M is also fishing and so was Vince from Stow-A-Way Marina.  Tonight, there are 34 boats competing.

Our first stop we were fishing shallow.  Jeremy tried to set the hook.  The fish, which was a crazy monster dug in, broke the line and snapped the rod in half.  I just wander how big that fish was.  I lost one when Jeremy tried to net the fish and it jumped in the water.  It was about 2 pounds.  We caught one keeper on that spot.

We moved to the second spot, where we fished a brush pile in 8 feet of water.  I caught a 3 ½ pounder using a big black worm on a Texas rig.  The next spot was horrible.   The waves were coming over the boat.  The wind was so bad it bowed the line and I couldn’t feel the bottom.

The next spot we fished shallow and caught only small ones.  Then we hit a green light and culled one of our small keepers.

At 8:15 pm we had 3 fish in the boat and they were all small.  My mom said she was coming to the weight in and I texted, “Don’t come we have 3 small ones and I am not holding them up”.  She texted back, “You better they might win money, you never know”.  Then she texted “KEEP FISHING”.

We went to another green light.  A few minutes later I hooked up a 5.63 on my Texas rig.  Jeremy was fishing with a jerk bait.

I will let John Jay tell his story of what happened when he was fishing the same tournament on Tuesday night.

After take-off we ran to our first spot where I had found a few fish and did good in the past.  Immediately I thought I made a good decision because I hooked into a good fish right away.  Fought it for a while and it wrapped me up in some brush.  I got the boat on top of the brush, kept pressure on the line and could still feel it on there.  All of a sudden it came out and started coming up.  My adrenaline was going because I thought we were about to see a big one come up by the boat. We’ll, that wasn’t wrong, it was a fish, but a 4 pound catfish!

I got back up and kept casting, seeing more fish on my graph and I was hoping they weren’t all catfish.  Then the wind suddenly picked up and the manageable breeze turned into a 15 mph winds and taking occasional waves over the bough.  After catching a few more small bass, we determined we had to move.

Ran to another spot and found a school of fish on it.  We started catching a bunch of 15 inch non keeper bass, but it was every other cast. Normally any other time of year I’d move on and write that school off as small ones.  But being that it is August and fishing is typically pretty tough, I decided to stay around active fish (which may have been what cost me a win).  We ended up catching 2 small keepers off of it but I had a gut decision to go check a spot I hadn’t caught any fish off of recently, but I knew conditions were right.

I stayed with that thought for 10-15 minutes before I finally decided to go with it and run to this last spot at 8:25 (we were due in at 9pm).  I put the trolling motor down and immediately see fish all on the spot.  My partner caught a 3 ½ right away to fill our limit and I started catching several more 15 inch non keepers.  It came down to 8:48 and I knew we needed 7-10 minutes to make it back to check in for the ride and idle in the no wake zone.  On my second to last cast, I had a good fish hammer my bait but miss it.  I knew I only had time for 1 more cast so I made it.  Half way in I get a really big bite.  I set back into the fish and it immediately takes off and starts ripping drag and came up to the surface to jump, but just makes a splash and darts on top of the water, taking off pulling more drag.  I thought that it was kinda odd the way it did that and that maybe I just foul hooked a gar or a hybrid by the way it took off and was pulling so much drag.  I chased the fish with the trolling motor and as it got closer to the boat, I saw it come up again and try to jump.  This time, I was able to see the fish and saw it was a big bass.  We netted the fish on the bow, my partner ran to pick his rods up and get ready to go as I pulled the trolling motor up, strapped the rods, grabbed the fish and culled the smallest one as we were idling out.  We made it back to check in with a minute to spare.  But I was wishing before I even caught that 6.51 pounder that I had made the decision to go there 10 minutes earlier or was in the second flight to have that 9:15 check in.  I was confident I could have made another cull to get rid of that small 2 pound keeper for one that would have won it for me.  None the less, it was a fish catch I won’t forget catching one that big on the very last cast.  Kind of like the stories you hear the pros talking about.  Which should always make you remember that it can ALWAYS come down to the very last cast.

John Jay and his partner, Dawson came in 4th with a bag weighing in at 11.91 pounds and John actually caught his big bass on his last cast.  That is why every second counts.  He also got a check.

Today I went down to Trey’s beach house and we went fishing in the boat out in the bay.  We caught 6 redfish and 1 Bull Red.  We let the Bull Red go.  I also caught a flounder.  We filleted our fish so we can cook them for dinner when we start school next week.