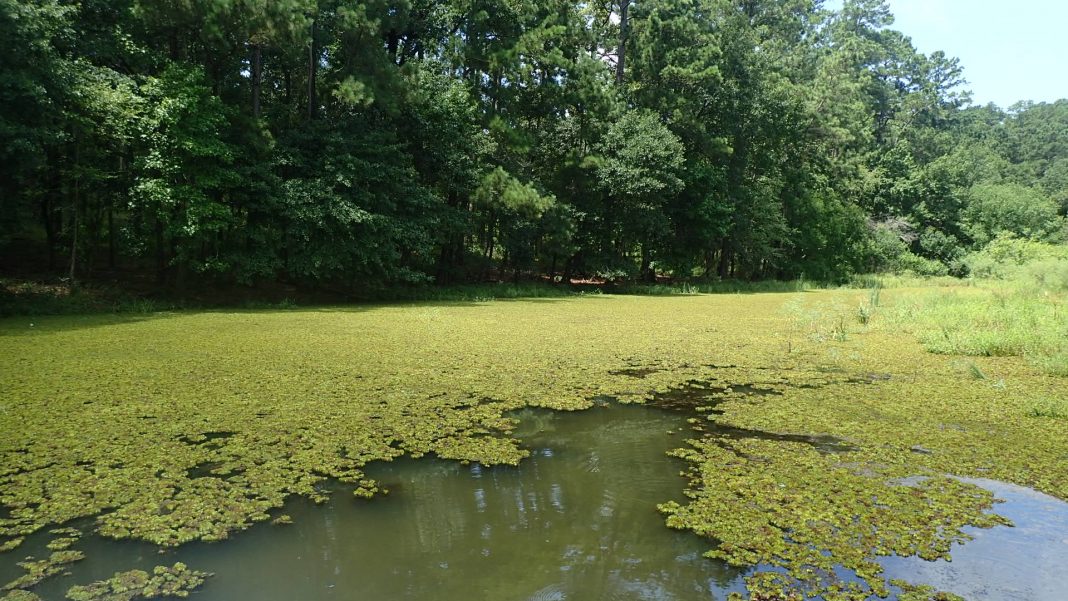 Every summer, Texas Parks and Wildlife, College Station-Houston Fisheries district team conducts an annual vegetation survey on Lake Conroe.   The Conroe surveys began when hydrilla dominated the lake and were used to track its coverage and control.  We still use annual surveys to track invasive species, but nowadays we also get to follow restoration efforts of beneficial native species.

Many scientific surveys will sub-sample a population instead of counting each individual.  For example, we may catch 200 largemouth bass and use their ages, lengths and weights to estimate what the entire population of bass looks like without disrupting the fishery by trying to catch every single fish.  Not so with our vegetation survey!  Each summer we travel the entire perimeter of Lake Conroe’s shoreline—every cove, canal, and island—cataloguing the size and species of each plant we find touching the water.  This data is then mapped in a Geographic Information System (GIS) which allows us to calculate the total area each species covers.  The process also creates maps that we can share with the San Jacinto River Authority to control invasive species and with our restoration partners like Seven Coves Bass Club to promote native beneficial species with and find the best fish habitat.

Vegetation surveys can be grueling. We spend long days in direct sunlight, traveling at a snail’s pace around the lake with no end to the boat engine’s drone as we monotonously note each species.  However, it gives provides us with data vital to manage the fisheries and habitat on Lake Conroe and is one of the best chances we have to see every detail of the lake.  We often see eagles diving for fish, herons gliding over the surface, and Largemouth Bass hunting the shallows.

The 2020 survey wrapped up in July, just in time to send the results off for this article.  There has been a marvelous expansion of native submersed and floating-leaved species like American pondweed, bushy pond, vallisneria, and white water lily.  These species provide valuable fish and wildlife habitat, reduce erosion, and improve water quality without forming thick mats that interfere with access to the lake.  These native species were introduced to Lake Conroe from a nursery built by the Seven Coves Bass Club and maintained by the San Jacinto River Authority as part of the Lake Conroe Aquatic Restoration project spearheaded by Texas Parks and Wildlife.  This effort has been successful so far: this year we saw 1,232 acres of native aquatic plants, mostly in the northern end of the lake above FM 1097.  Natives have been expanding for the last several years, but this year’s boom was a surprise to everyone and treat to see our hard work with native restoration bear fruit.  The habit these plants create will be boon to fish and wildlife throughout the lake.

Unfortunately, not all plants are beneficial to Lake Conroe. The annual survey also allows us to track the abundance of invasive species like water hyacinth and giant salvinia.  Both species form dense mats on the surface of the water that most boats cannot pass through. They prevent oxygen from diffusing into the water, lowering oxygen levels available to invertebrates and fish, block sunlight, and acidify the water.  They grow quickly (giant salvinia can double in size in under 10 days) and they don’t even provide good habitat for most fish species!

We did see an expansion of water hyacinth and giant salvinia this year, likely due to a lack of large rain events this spring.  Lake Conroe has experienced large rain events each spring for the last several years. The rains pushed the hyacinth and salvinia out of the hard-to-reach coves and back waters, and downstream over the dam.  Without Mother Nature’s help this year, both species were able to expand more quickly.  The San Jacinto River Authority has been busy treating these invasives, running multiple simultaneous vegetation control teams throughout the summer and treating hundreds of acres of water hyacinth and giant salvinia.

We also found minute traces of hydrilla in the Caney Creek arm of Lake Conroe.  This is the first hydrilla we’ve seen since grass carp were stocked in 2006-2008. For several years we have expected hydrilla to reemerge in 2020-2021 as the grass carp naturally die off.  Hydrilla can provide good fish habitat in some lakes, but on Lake Conroe it has a history of forming dense mats across thousands of acres, preventing access to the water for boaters, anglers, and homeowners.  We caught the reemergence early, finding just 1,300 square feet (0.03 acres) of hydrilla in 12 small patches.  Each patch was immediately treated with an herbicide that selectively targets hydrilla and has low impact on native species.

Texas Parks and Wildlife and the San Jacinto River Authority intend to strictly control hydrilla on Lake Conroe to prevent access issues while protecting and promoting native aquatic plants to improve fish habitat and fishing.  We know that hydrilla brings out many people’s passion and love for Lake Conroe and will be seeking public input from anglers, boaters, homeowners, and local businesspeople in the coming months.   We will also continue to provide updates through this publication, social media, and regular meetings.  If you would like more information, to ask us questions about vegetation management, or to be notified of upcoming public meetings, please contact Alice Best at [email protected] of 979-272-1430 ext 224.

Native aquatic plant species, like the white water lily and vallisneria shown here, are introduced into Lake Conroe in protected founder colonies to give them a head start over herbivores like grass carp and turtles.  Over time, the plants spread beyond the protective wire and create new colonies form seeds and propagules.

Plants like vallisneria (also called eel grass) form excellent fish and wildlife habitat and do not block access to the water.  Vallisneria has formed waving underwater meadows in several sheltered coves north of the FM 1097 bridge.

The Lake Conroe Native Plant Nursery was built by Seven Coves Bass Club and Texas Parks and Wildlife and is maintained by the San Jacinto River Authority.  Each year the San Jacinto River Authority plants over 600 native plants into Lake Conroe for habitat restoration, often with the help of volunteers, anglers, and Texas Parks and Wildlife.

Most of the 1,232 acres of native plants found on Lake Conroe during the 2020 vegetation survey were in the northern end of the reservoir.

The 2020 annual Lake Conroe vegetation survey completed by TPWD found 666 acres of giant salvinia and 294 acres of water hyacinth.  Both plants expanded coverage in 2020, likely due to a lack of high spring flows that have helped flush them out in past years.  The San Jacinto River Authority has been busy treating giant salvinia and water hyacinth throughout the summer.

Giant salvinina is a nuissance on Lake Conroe and requires constant control by the San Jacinto River Authority, who have been running multiple vegetation control groups throughout the summer.

Twelve patches of hydrilla found in the Caney Creek arm of Lake Conroe and were treated with a selective herbicide to control hydrilla spread with low impact to native beneficial species.  Texas Parks and Wildlife Technician Mike Gore dives to feel for hydrilla tubers near the largest patch of hydrilla to determine if it has spread.