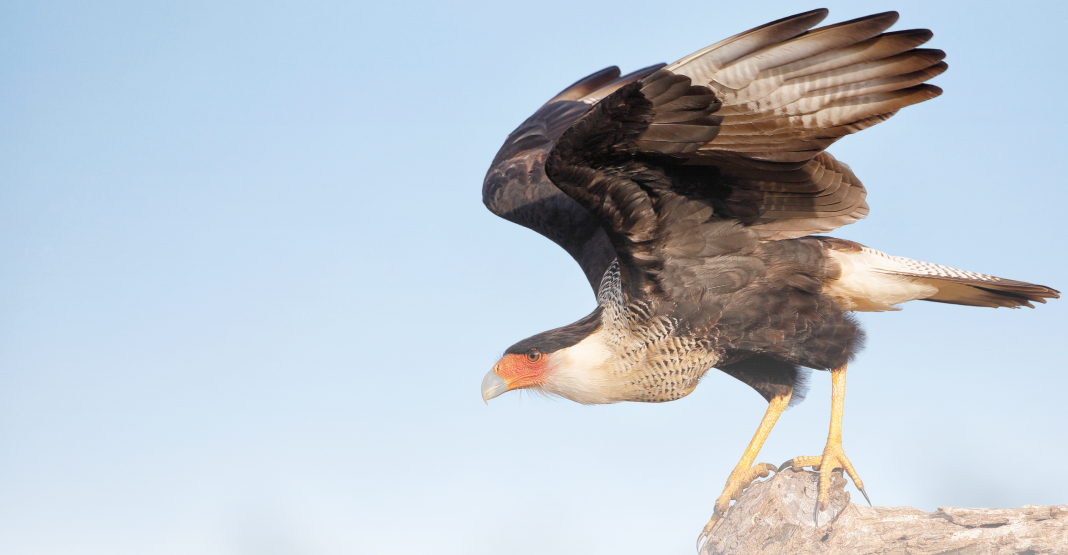 This is a bird I’ve never had the good fortune to see even though their range is limited to Texas, Arizona and Florida. I’m talking about the crested caracara. They are beautiful birds, quite large and belong to the falcon family but they are not typical in many respects to “true” falcons. They are about 22” in length and can have a wing span of up to 4’. They have four areas of white: white in the tail, white on each wing and on their necks They have a large blue-grey bill with red a cere (a waxy fleshy covering at the base of the upper beak) and colorful facial skin. Amazingly, they have a patch of skin around their eyes and they can actually change the color of the skin from pink to red-orange, and then to yellow if excited. Their orange legs are long and thin with flat talons. They feed on insects, reptiles, large rodents, mammals, birds and carrion. They’ve even been spotted chasing vultures away from roadkill but they have to wait until the vulture has opened it up the carrion since they are unable to do it. They prefer to reside in open prairies and rangeland which is perfect for searching for prey and nesting. They spend more time on the ground than they do flying. 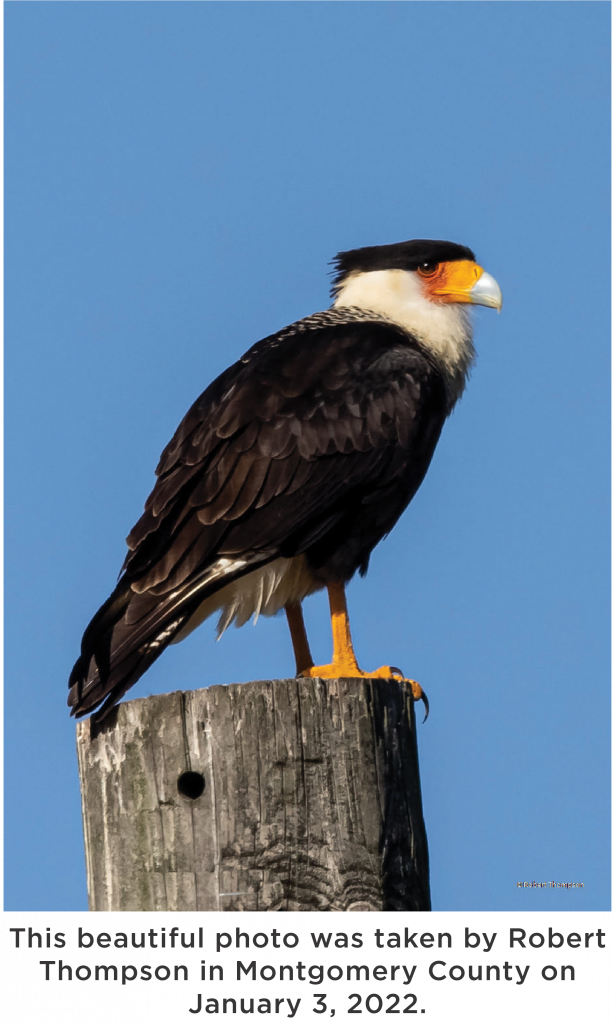 There’s a little courtship routine they go through. The male and potential female mate toss their heads back and let out a guttural call. Once a mate is found, they stay together for life. Pairs and family groups will preen each other. They nest between 8 and 50 feet above ground at the top of a shrub, tree or even cacti in Arizona and usually return to it year after year. Their nest is made up of sticks, weeds, vines and debris and sometimes they’ll build it on top of an old nest of another species of bird. If this is the case, they have to do a little housekeeping and add some materials to the nest. If they start from scratch, it can take 2 to 4 weeks to build the nest and both males and females work on it.

If you live in the Houston area, the best places to find this beauty are in the Katy area north of I-10 and east to Highway 290, Galveston Island, the Bolivar Peninsula, the Brazos Bend area and south of Houston anywhere you see grasslands and open fields.

The US Fish and Wildlife Service and the Florida Fish and Wildlife Conservation Commission have listed the crested caracara as threatened due to population declines. This is mainly due to the loss of dry prairie habitat. Remember, it’s illegal to harass, harm, capture, or kill this bird.