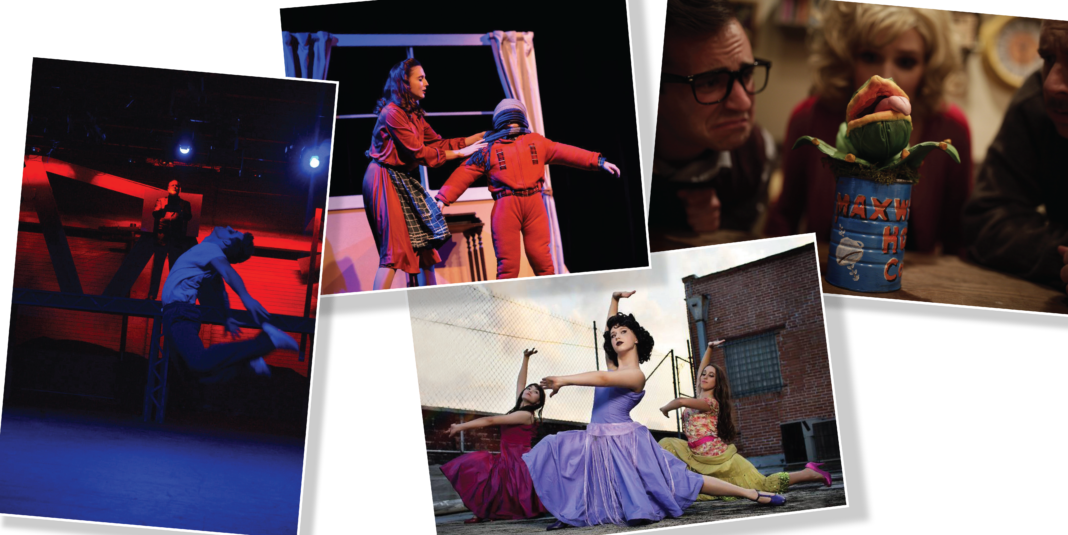 Since 1967, The Players Theatre Company has provided opportunities for cultural enrichment, creative development, and self–discovery through the art of theatre, and we are excited to welcome you to our 56th fantastic season!

Each year, The Players present four Broadway-style musicals and three straight plays, beginning in September and running through the following July.  As we aim to bring quality live entertainment to Montgomery County for our 56th season, we are confident that the upcoming year will be our largest and most momentous yet!

Based on true events, Kinky Boots is the story of two vastly different people who have more in common than either thinks.  The two bond over shoes and become an unlikely pair of friends who take the world by storm with their sensational stilettos!

Kinky Boots won the Tony, Grammy, and Olivier Awards for Best Musical, and it is sure to win your heart too as it opens our 56th season!

Barefoot in the Park

If you were born in a year with 19 in front of it, you might remember Robert Redford dazzling on screen in this comedy gem about a newlywed couple who are as mismatched as they come!  Redford also starred in the Broadway premiere of Simon’s Barefoot in the Park, playing straight-laced Paul to Elizabeth Ashley’s free-spirited Corrie (Jane Fonda played Corrie in the movie).

One aspect which makes this show so special is a small cast in an intimate apartment setting in our cozy Owen Theatre.  Audiences will feel right at home with the Bratters as they navigate their first few weeks as true newlyweds.

Bringing family-friendly shows to our patrons over the winter holidays is one of our most favorite things!  We are so excited to span the years from the 1960s to today with our December show, You’re a Good Man, Charlie Brown!

The gang’s all here in this familiar-feeling musical comedy-Linus and his blanket, Schroeder and his piano, Lucy and her psychiatrist stand, Sally and her philosophies, Snoopy and his doghouse, and Charlie Brown and his love for the Little Red-headed Girl, of course!

Make sure you get your tickets early for this show-stopper since our Christmas musicals usually sell out quickly!

By Tim Firth
Based on the Miramax motion picture by Juliette Towhidi and Tim Firth
January 20-February 4, 2023

Eleven friends, who are all in varying seasons of life, band together to raise money for a commemorative settee for a local hospital’s waiting room after one of the women’s husband succumbs to Leukemia.  While it doesn’t sound like the premise for laugh-out-loud comedy, the way these friends go about fundraising may just split your sides!  Grab your best friend and cherish an evening together watching the fastest-selling play in British theatre history charm on the Owen stage.

Book by Hugh Wheeler
Music and Lyrics by Stephen Sondheim
Based on an adaptation by Christopher Bond
March 11-27, 2023
Sweeney Todd is a dark, complex musical based on a Victorian era serial novelization.

While audiences will be captivated by the haunting score, there are plenty of opportunities for macabre laughs.  Want to try one of Mrs. Lovett’s pies?  Will you still once you know her secret ingredient?

Though we may want to villainize Sweeny Todd for his barbaric barbering acts, his traumatic past gives us pause and, perhaps, even understanding.

Leave the littles at home for this musical masterpiece and enjoy a dramatic evening.

*This show is our tribute to the magnificent Stephen Sondheim who passed away in November 2021.

Ever wanted to know what it’s like to work backstage during a disastrous theatrical performance?  Noises Off takes the audience there as the cast of characters rotate from behind the scenes to on-stage and back again!  There’s drama on stage and off, doors slamming (on stage and off), and comedy ensuing everywhere you look in this farcical comedy perfect for anyone who wants a sneak peek at the world of theatre!

Book by Harvey Fierstein
Music and Lyrics by Jerry Herman
Based on the play by Jean Poiret
June 9-25, 2023

Familiarly known as “La Cage”, La Cage aux Folles is fun, frolicking, and fabulous, and we are thrilled to bring it to our stage for its 40th anniversary!   Glamorous costumes, hilarious musical numbers, and an endearing story of all kinds of love, La Cage is a true feel-good show that is a perfect date night for every couple.

We’re so grateful for all the years our dedicated patrons have supported us and we look forward to meeting new faces this season as we bring both new, innovative shows and time-tested standards to the Owen stage.