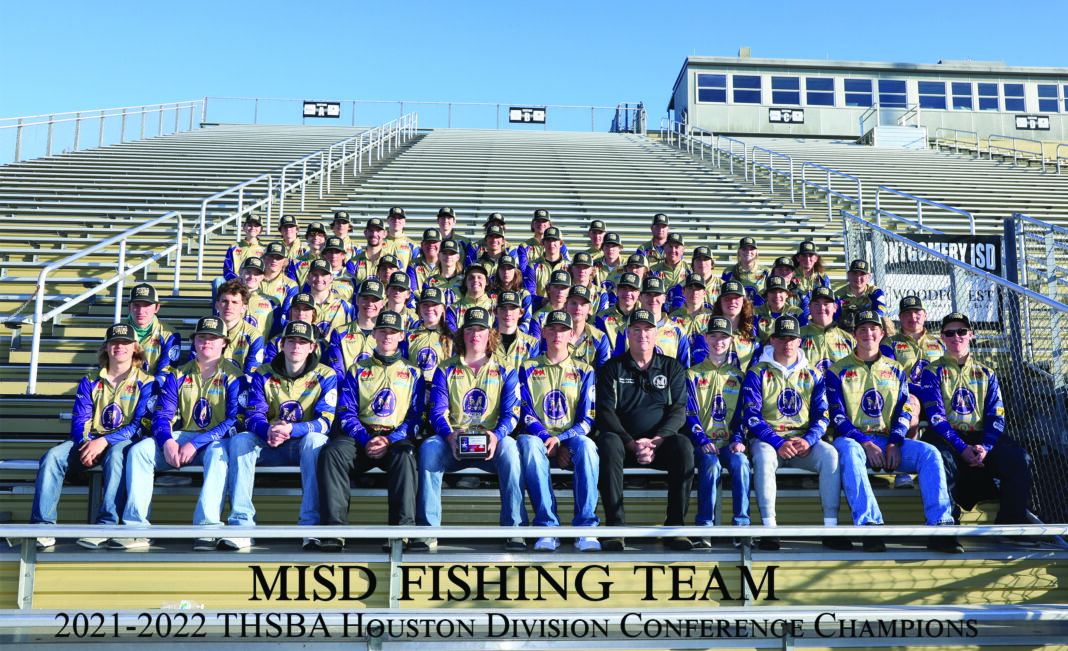 At the beginning of the Season back in September this Senior Laden Team put forth some strong, yet achievable goals.  Repeat as the Texas High School Bass Association Conference Champions, have another Angler of the Year, qualify the most individual teams to regionals than any other program, repeat as the THSBA Regional Champions, qualify the most individual teams to State, and to win an elusive Second State Championship.

All of these goals are very difficult to obtain, but as mentioned above, this combined squad from both Lake Creek & Montgomery High Schools is deep with Senior Leadership.  Students that know what it’s like to set goals, and work towards accomplishing them.

Three of our six goals were met last Saturday March the 12th.  The Team won their 7th Conference Title in 8 years of competing.  Cade Lipham repeated as the Angler of the Year for the Houston Division, and we qualified a record number of Individual Teams to Regionals, with 29 Teams earning the right to compete at the Regional Championship.

By winning the THSBA Lake Conroe Event, the Team won its 4th Conference Tournament out of 5, coming in 2nd last month at Toledo Bend.  This put the Team’s point total at 499 out of a possible 500 points, easily outdistancing our closest competitor in the 28 High School Houston Division Conference by 7 points.

This Conference win was led by Colton Hatzold and Karson Rabern, who had a strong tournament, ending up in 7th Place out of 151 Individual Teams that braved the harsh winter like conditions on Saturday morning.  Colton & Karson had a nice limit that weighed 11.59 pounds, which is even more impressive due to the fact that over half the field did not catch a keeper.

Following close behind in 8th place were Wyatt Lanier and Beau Massey, who brought 11.71 pounds of fish to the scales.   Just a little more than a pound behind Lanier & Massey were Montgomery Seniors Jake Hird and Leslie Williams, who brought in 4 nice fish that weighed 10.63 pounds, landing them in 10th place.  This put our total weight for our top 3 Teams, which is how the School Champion is determined at 33.93 pounds, securing the victory by over 5 pounds.

The 29 Teams that will move on to Regionals, will compete on Lake Travis on April the 9th.  It will be there, that we will look forward to the opportunity to accomplish two more of our goals, win the Regional Championship for the 4th time in our 8 year history, and to qualify a record number of individual teams to the State Tournament.

The Team would like to thank all of the supporters in the community that came out to the weigh-in.  Also high on our gratitude list would be to all of the Parents, Captains, & Sponsors, that give so much in order for these young men and women to accomplish many goals, and represent the community of Montgomery in such a positive manner.