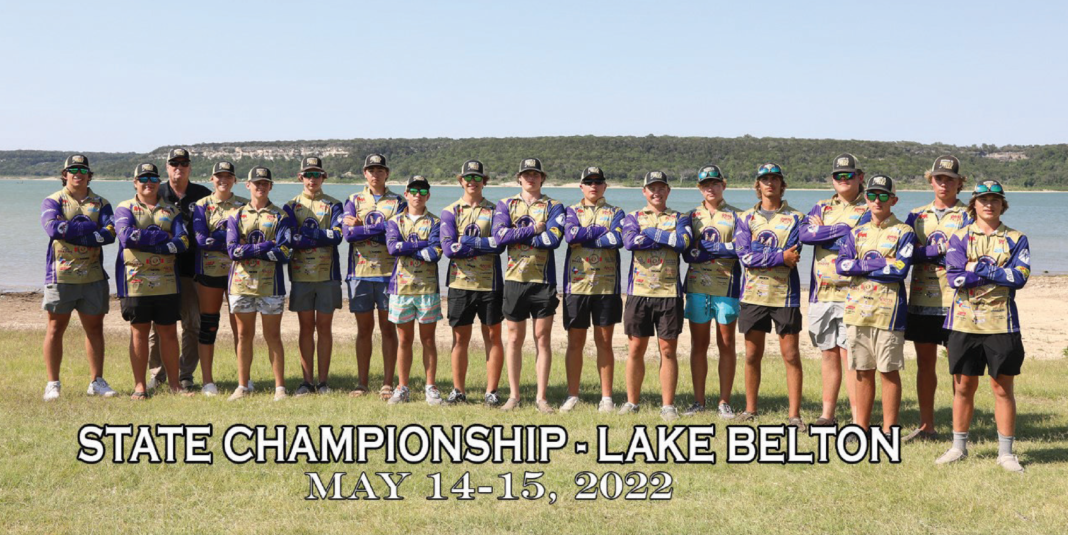 At the Texas High School Bass Association State Championship this past weekend on Lake Belton, out of 252 High Schools or Programs that started the year, 133 had Teams that qualified for the State Tournament.  The MISD Fishing Team was well represented at this tournament, as we qualified the most Teams ever (12) with 23 Anglers from both Montgomery and Lake Creek earning berths to this prestigious event.  MISD also brought the biggest contingency of Anglers out of any program in the State, in a very large field of 325 Teams and over 600 Student Anglers.

There was a good mix from both Schools, as Lake Creek had 12 students that qualified, and Montgomery High had 11.  Confidence was high, as many of the Teams reported good results during their Pre-practice in the weeks prior to the Tournament.

As many of you are aware, Lake Belton is not a very large lake at just over 12,000 acres, and when you put over 300 Tournament Boats on the water, coupled with normal week-end traffic, it made for a trying situation.  However, you would have been proud of these young Anglers and their Captains, as they never complained, and focused all of their attention with the task at hand, competing for another State Championship.

After the first day of Competition, the Team remained confident, as the Team was in third out of 133 High Schools or combined Programs, and in striking distance of the top spot.  Our Top 3 Teams had a combined weight of 28.5 pounds, being led by Preston Burch and Andrew Wilson’s 5 fish limit of 10.92 pounds.  They were followed by Wyatt Lanier and Beau Massey, who also brought in a nice sack of fish that tipped the scales at 9.13 pounds.  Rounding out our top 3 Teams were 4 time State Qualifiers Will Collora and Brayden Miller, who brought in 8.45 pounds of Bass to the scales.

The second day of competition started the same as the previous two days, hot and clear, as High Pressure, both atmospherically as well as competitors on the water, ruled the day.   Your MISD Anglers “Never Gave Up,” as they pressed forward with their sights set on one goal, a second State Championship in the Team’s eight year history.  The second day saw a new group of Anglers from MISD rise up to the challenge for our Top 3 Teams for the day, and their tenacity needs to be recognized, as they “Never Gave Up.”  They were reigning Angler of the Year for the Houston Division Cade Lipham with 9.01 pounds.  Fallon Clepper and Wyatt Ford with 7.89 pounds, followed by Tracy Moore and Talan Shavers, coming in with 6.67 pounds.

All told for the Tournament, our three best Teams for this two day event were Andrew Wilson and Preston Burch with 14.03, Jaxon Carnine and Ian Karson Nelson with 13.11, followed by Fallon Clepper and Wyatt Ford with a two day total of 12.60 pounds.  Their total combined weight of 39.74 pounds, earning the MISD Fishing Team a respectable 12th Place finish out of 133 Programs competing.

Mrs. Luedke and I cannot be prouder of a Team than we are of this 2021-2022 combined Squad.  The Seniors on this Team won 4 consecutive Conference Titles in a Row.  They also won a Regional Championship, as well as finished 2nd in State in 2021.  They also taught the underclassmen in this program the valuable lesson of perseverance, as they “Never Gave Up.”