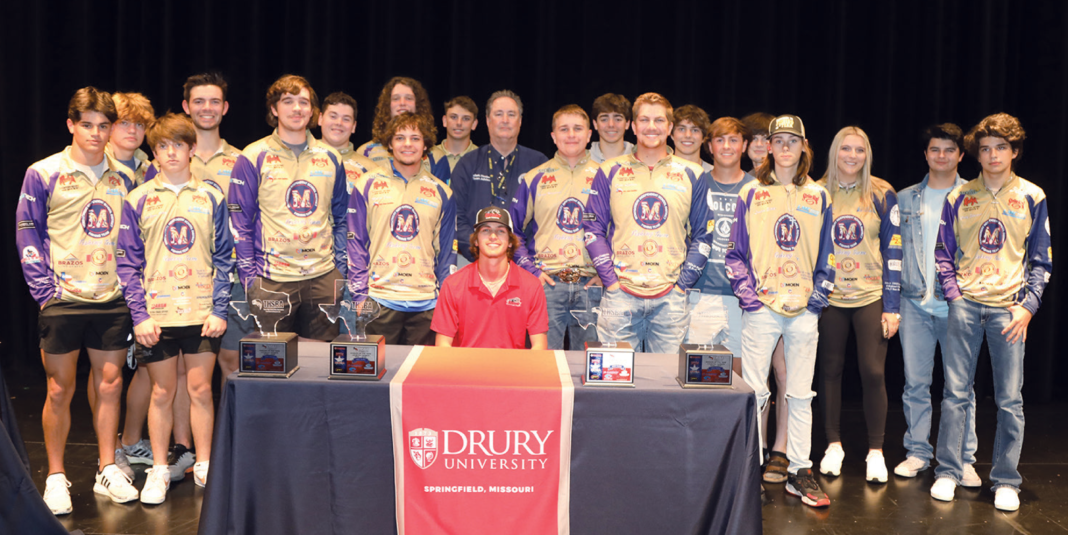 In the Dictionary, trailblazer is defined as “a person who blazes a trail for others to follow and a pioneer in any field of endeavor.”  You cannot find a better description of Two Time Angler of the Year Cade Lipham.

Cade has lived this mantra to the fullest, earning 15 Top Ten finishes in his high school career and amassing 15K in scholarship money from the THSBA.  Cade is also the first person from the MISD Fishing Team to accept a scholarship offer to be on a college bass fishing team.  Others have been offered scholarships, but Cade is the first to accept, and pardon the pun, what a “whopper” of a deal he has agreed to.

In the fall, Cade will begin his quest to take it to the next level at nationally ranked Drury University in Springfield, Missouri.  Cade will have a scholarship in the amount of 21K per year for four years to go towards his education.  This coupled with the scholarships he has won by competing in the Texas High School Bass Association gives Cade a grand total of 99K to pursue his dreams of earning a business degree and being a member of a highly competitive nationally ranked bass fishing team.

In the eight years of doing this out of over 500 students, I can only think of three other individuals that had talent that would rival Cade.  Those individuals were Derek Pietsch, Mason Hoke, and Dylan Dunn, who were on our 2017 State Championship Team.  All three were on the radars of college coaches, with two of them being offered scholarships but declining to pursue their academics elsewhere.  All three have done extremely well in college, both academically, as well as competitively, with all three competing for their respective college teams, and graduating from college with degrees.

Speaking of the state championship, as many of you are aware, the MISD Fishing Team will be competing May 13th-15th on Lake Belton, looking to earn our 2nd THSBA State Championship.
It is here, that all eyes will be on the team from MISD, as we are bringing more individual teams than any other program (12) that have earned the right to be there.  It is at Lake Belton that we fully expect Cade to be in the mix of leading our combined squad from both Lake Creek and Montgomery High Schools to the state championship.

Lastly, by accepting this scholarship to Drury University, Cade has opened the door for many other MISD Anglers to pursue degrees in college and compete on a national level in the college bass fishing world.  Cade has put MISD squarely on the National Bass Fishing Collegiate Map, as once he signed, numerous college coaches have reached out to me inquiring if I had another Cade Lipham coming up.  I explain to them that I have many talented anglers to put them in contact with, but Cade is unique, a “Trailblazer.”