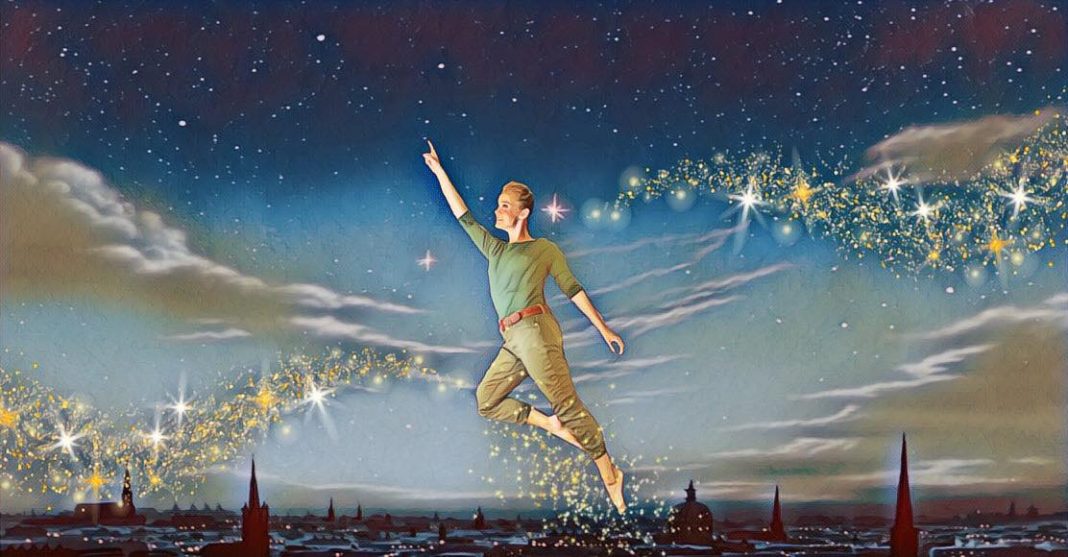 The magical musical Peter Pan is planning on coming to the Crighton Stage sometime this Summer / Fall of 2020.  Presented by Stage Right of Texas, this musical that is full of imagination is sure to thrill and entertain audiences of all ages. The show’s memorable songs include “Never Never Land”, “I Won’t Grow Up” and ‘’I’m Flying” and just like the songs says, Peter Pan will be flying in this production. This production is directed by multiple Montie Award winner: Sara Preisler.

Peter and his mischievous fairy sidekick, Tinkerbell, visit the nursery of the Darling children late one night and, with a sprinkle of pixie dust, begin a magical journey across the stars that none of them will ever forget. In the adventure of a lifetime, the travelers come face to face with a ticking crocodile, a
fierce Indian tribe, a band of bungling pirates and, of course, the villainous Captain Hook.

Sara has put together a cast of extraordinary proportions to bring this fairytale to life. Leading the cast as Peter Pan is Madison Mapes. Audiences may remember her most recently as Grace, a stepsister in Stage-Right’s production of Cinderella or as Dorothy Brock from Thoroughly Modern Millie. Madison definitely brings the charm, wit, and humor of Peter Pan to life, which is what helped earn her this title role. Playing her arch nemesis, Captain Hook, is Wyatt Langehennig. This is Wyatt’s first theatre production with Stage-Right. Wyatt is currently studying at LSCM, but has been seen performing at the Texas Ren Faire. Wyatt’s portrayal of Hook definitely showcases his ability to bring comedy and cruelness to life, however still remaining likeable to an audience.

Also returning to the stage is a Conroe favorite, Katie Kowalik as Wendy Darling. Katie, who will soon be a sophomore in high school, was last seen on the Crighton Stage as Anne Frank in the Diary of Anne Frank. The other roles of the darling family are played by Keegan Pepper as John, Austin Krueger as Michael and Christina Sato as Mrs. Darling. You may remember Keegan as the blanket-toting Linus in A Charlie Brown Christmas. Austin was most recently seen in The Best Christmas Pageant Ever and last season had audiences rolling as Gus-Gus in Cinderella. A new Crighton Favorite, Christina Sato, returns after recently catching the theatre bug from her roles as Muzzy in Thoroughly Modern Millie and the Evil Stepmother in Cinderella.

Finally returning to the Crighton Stage are the Manning sisters. Paige Manning is taking on the role of Tiger Lily, the dance lead, Indian princess in this version.  Paige will no doubt be amazing in this role after all her dance training, she currently is an instructor at Crowd Pleasers Dance. Sara knows she is going to blow audiences away when the crowd finally gets to see her.  Paige’s younger sister, Parker Manning, will be taking on the role of Liza, the ballet-dancing Darling family housekeeper. Parker, still in High School, has already been spending her summer’s training in dance at the Joffrey Academy in New York. Sara has been mentoring both of these girls since they were 6 years old and is so excited to have them back and both on stage together again.

Rounding out the cast of principle roles is John Kenward as Smee, Chelsea Sato as the Crocodile and Keali Krueger as Nana/Jane. John Kenward will humor audiences with his comedic portrayal of Smee. And the Crighton’s most loved costumer, Debbie Preisler will truly be transforming Chelsea and Keali into our loveable animal friends.

Sara Preisler brings together many new and old faces to round out other roles in this production. Some of the folks you will get to see in this production, Mia Brandimarte, The Rickwalt Sisters, Wesley Burns, Cash Fournier are a few of the Lost Boys. A couple of Hook’s trusty pirates are played by Matthew Wehrig, Todd Brady, Josh Fine, Carlos Sato and Heba Toulan. And a few of our advanced dancing Indians, Danielle Stringfellow, Elianna Barosh, Addison Burleson, Cossette Czarnopis, and Emma Dantzler.

Sara’s artistic team is made up of Cricket Pepper and Layne Roberts, who recently all worked together on the showstopper Cinderella. Cricket, who some may say is a perfectionist, is taking on the role of Stage Manager, Set Designer, Prop Mistress and Co-Choreographer and Asst. Director. Her attention to detail and spunky assertiveness definitely make her a stand out in all her job titles. Multiple award-winning actress Layne Roberts is Music and Assistant Directing in this production. Layne, sometimes known as the musical genius of Conroe, is up for the challenge of teaching the entire cast to sing over online rehearsals. Right now the entire production process is having to take place via, ZOOM meetings until it is safe for a cast this size to rehearse. Of course, if it’s a Preisler production, it can’t be done without outstanding costumer and mother, Debbie Preisler. And helping bring the set and props to life is Kara Kowalik, who isn’t afraid of glitter, which is a requirement for this production.

Peter Pan will be presented at the Historic Crighton Theatre (Recently named one of the top 10 venues in the state by BestThingsTx.com to see live theatre). Located at 234 N Main Street, Conroe, Texas 77301. Stage Right currently has the show running July 10 – 26th of 2020, but those dates could change depending on the current situation.  Fridays and Saturdays at 8pm and Sundays at 2 pm. For updated information on this production and to purchase tickets please visit online at www.stage-right.org or by calling the box office at 936-441-7469. Discounts are available by calling the box office. More Information about STAGE RIGHT can be found out on our website at www.stage-right.org