Many people decide to adopt dogs.  Some people want a pure bred puppy from a breeder because they want a particular breed of dog.  When adopting a pure bred puppy, there is a reasonable expectation of the physical characteristics and primary behaviors that the puppy will display when they reach adulthood.  Other people want to obtain a new family member from a shelter or a rescue group because they like the idea of giving a needy animal a home and saving a life.  While taking in a homeless animal is admirable, there may be some unknowns that come along with the new dog.  If the person adopts a puppy or adolescent, there are no guarantees about the animal’s adult size or behaviors that they may display.  If they adopt an adult dog, they will know the animal’s size, coat length, and coloring but not necessarily much about their behaviors,

I recently adopted an adult dog.  A week earlier, my friend and her husband adopted a dog from a shelter.  Their dog was surrendered by an owner who claimed that the dog was a fence climber.  The dog is an 80 pound Rottweiler so based on her weight and body shape, it is unlikely that she could climb a six foot privacy fence.  In the time that she has lived in her new home, she has not made any effort to scale the fence.  In addition, shelter staff said that the dog walked well on a leash.  Her leash walking was fine if being pulled down the street at a run is your definition of properly walking on a leash.  My new dog came from a rescue and lived with a foster family for two months.  I was told that she was cat friendly but people shy, she was a counter surfer, and she was good in a crate.  It turned out that the she hates the crate even for half an hour.  Once I put away the crate and let her stay in her bed, she was happy.  With a little training, she has given up her counter surfing ways.  While not completely accurate, both of us were given information about the dogs so that we could decide up front if we could handle their issues.  Please keep in mind that many behavior issues are relatively easy to fix through training. 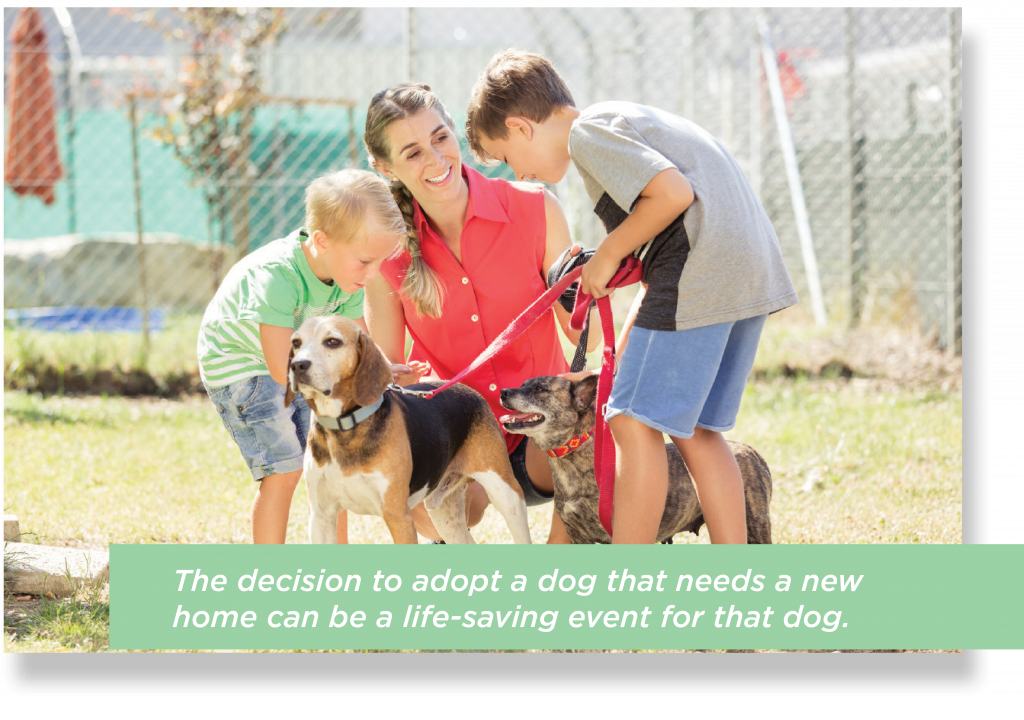 There are many fantastic dogs that find themselves needing a new home for a variety of reasons:  the family is moving and cannot take the dog with them, the family does not have time for the dog, the family cannot afford to keep the dog, the family has a new baby and the dog is jealous of the baby, the dog is too active or out of control, or the dog has issues that the family will not work to resolve.  Some of the most common issues that a rehomed dog may have include:  the dog will not stay in the yard, the dog chases children, the dog is aggressive to other family pets, or my personal favorite – the dog goes to the bathroom in the house.   In most cases, training would correct the issues and make the dog a much better family member.  Instead, the dog is abandoned at a shelter.  Then, the dog’s issues become someone else’s problem.

When you bring a new dog home, slowly introduce them to their new location and routine.  From the dog’s point of view, the rug has been pulled out from under their feet and everything they know has changed.  They have been removed from familiar people and surroundings.  Their new environment has different sights, sounds, and smells.  They may have been given a new name that they do not recognize.  They do not know where the water dish is located, when they will get to eat, or where they will sleep.  They are not familiar with the layout of the house or yard.  They do not know where they fit into the new world they suddenly have found themselves in.

Once in a new home, the dog will enter a period in which they will watch everything and try not to make waves.  The period could last a couple weeks to a few months.  During that period, their personality may be subdued.  This is a good time for you to introduce your new dog to the rules of the household such as is the dog allowed to get on the couch.  Keep in mind that a dog cannot learn everything at once so introduce the rules one or two at a time.  The exception to going slow is where safety of people or the dog is concerned.  Safety issues must be addressed promptly.  Every person in the household needs to understand the rules that the dog must follow and consistently enforce them.  The dog will become confused and fail to learn the household rules if little Johnny lets the dog get on the couch but mom says it is not permitted.  With consistency, the dog will quickly learn what is expected of them.

Bringing a new animal into the home can be rewarding and enjoyable.  The decision to adopt a dog that needs a new home can be a life-saving event for that dog.  In return, the new dog can provide lots of love and joy to the family.  That is not to say that everything will be easy or problem free.  But by working through the issues over time and through training, your family will ended up with wonderful pet.  Most of the time, any behavior issues that they might bring with them can be resolved or greatly improved with training, including obedience training.  The time and effort involved to train the dog will be worth the effort when you end up with a great new family member.