If you have attended Stage Right’s productions at the historic Crighton Theatre, you have no doubt enjoyed a play directed by either Tina Cafeo or Manny Cafeo.  The powerhouse couple are well known in the north Houston theatre community.  Tina has directed The Wizard of Oz, Into the Woods, The Best Christmas Pageant Ever and many other fabulous productions.  Thoroughly Modern Millie, My Fair Lady and Lend Me a Tenor are just a small example of the numerous blockbuster shows that have been directed by Manny Cafeo.   These two have enriched our theatre with their excellent acting and directing skills. In addition to those creative endeavors, Whodunnit?, our next production was written by Tina Cafeo, Manny Cafeo and Ina Bott.  Tina is directing the Stage Right October production of this family friendly murder mystery. 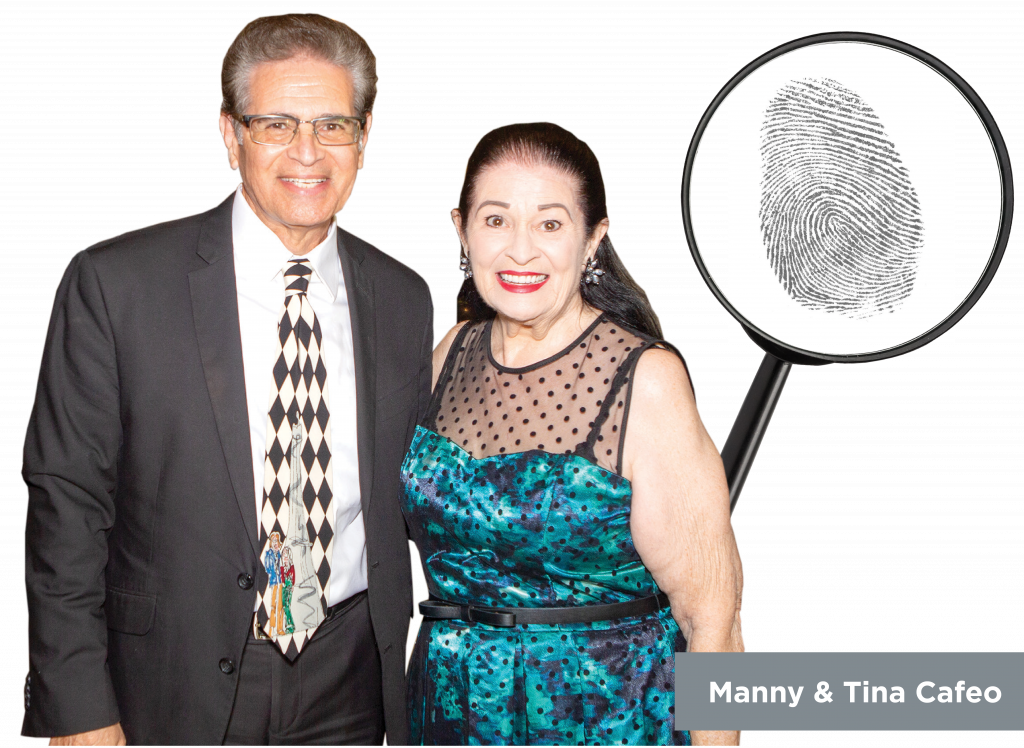 In 1983, while operating her own acting/teaching studio, Tina realized she needed a play for her older teenage class to perform. She wanted a production where every cast member had a decent part.  Not finding anything to meet these requirements, she decided to write her own play. She called her dear friend Ina Bott who was a social columnist, journalist and reviewer for many of the plays produced in Houston.  Ina agreed to assist Tina in writing the play and two months later Whodunnit? was complete.  The play centers around the current events of 1983 including the United States’ involvement in the war between the Contras and the Sandinistas in Nicaragua, front page murders, and the huge scandal of televangelists preaching the gospel while scamming millions of dollars from their followers as one of them was engaging in numerous adulterous affairs and the other was a drug addict.  Tina’s students performed Whodunnit? successfully and Tina thought that would be the only production of this play.

Years later, Tina and Ina went to New York City to attend several Broadway musicals and mistakenly ended up in a non-musical production.  Thirty minutes into the show, Tina had an exciting idea and decided they were going back to Houston and rewriting Whodunnit? adding lots of comedy and outrageous characters to the script.  Furthermore, the audience would guess who the murderer was! She enlisted the exert assistance of her husband Manny and the three enhanced the original story.  The premiere production of the new script was used as a fund-raiser for a young girl who needed a liver transplant and raised a sizable contribution toward her medical expenses.  It was greatly enjoyed by this first audience. Since then, it has been produced numerous times and it’s always a hit.

Whodunnit? is filled with quirky characters including a wacky psychic, an intellectually challenged French maid, a couple of insincere televangelists, a wife with a love of designer clothes and expensive jewelry, an inept butler and a daughter involved with a young man supposedly attempting to prevent Communists from overthrowing Nicaragua.  Throw in the murder of a wealthy man who was in the process of changing his will and that creates suspects with motives for murder. Whodunnit? Was it the distraught wife, the reporter with a big secret, the televangelists? Or maybe the butler did it! Can you solve the mystery?

Whodunnit? runs from October 22-November 7 at
the historic Crighton Theatre in downtown Conroe.
You can purchase tickets at crightontheatre.org or call the box office at (936) 441-7469. Tickets are $26 for adults, $22 for seniors over 60 and $17 for youth.

Look as Young as You Feel with a Simply Creative Approach

Getting Paid Just Got Easier

PAWsitively Pamper your Pet at The Barkly Pet Retreat & Spa

We’re so excited for you to see the next chapter of Dock Line Magazine: engaging with the community, showcasing compelling stories, and bringing you news of your area!

Subscribe down below to keep up to date on the exciting things to come!