“Without question the most deplorable event in the history of American ornithology was the introduction of the English Sparrow.” –W.L. Dawson, The Birds of Ohio, 1903

“Without question the most deplorable event in the history of American ornithology was the introduction of the English Sparrow.” –W.L. Dawson, The Birds of Ohio, 1903 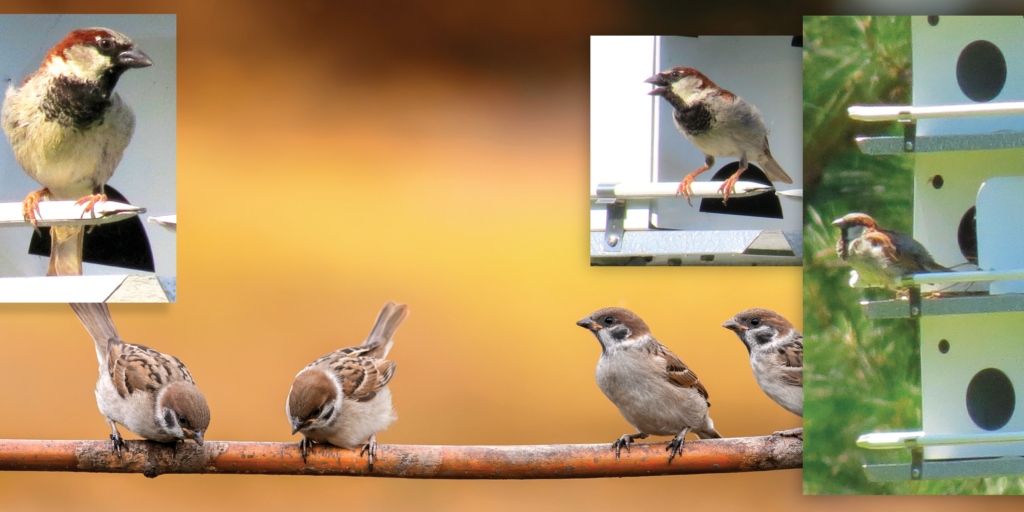 Around 160 years ago a British man living in New York became homesick for his native English sparrows.  He brought several pairs to New York, and released them.  Today they have become a prodigious invasive species, displacing native birds throughout North and South America.  There are many species of wonderful native sparrows in the US, but Common House Sparrows are the descendants of those first invasive English birds.

On the plus side they are cute, chunky, brown-striped balls of energy, loving dust baths and bird seed.  House sparrow is an apt name because they prefer to nest on, in, or near man-made structures.  Their lives are entwined with ours, chirping all around us while living under eaves, over doorways, and in open garages.  Because they seem to fear us less than most birds it is delightful that they like to be where we live.

It is hard not to admire these birds for their friendly and plucky nature.  However, they are problematic little brown jobs.  They are a danger to many native birds in our area, including the Eastern Bluebird.  House sparrows routinely destroy bluebird eggs, tear up their nests, viciously kill chicks, and even kill female bluebirds as they sit on their nests.  House sparrows are not carnivorous and do not eat meat to survive.  They are seed eaters or herbivores, but they chase, attack and kill native birds in their territory!  Since house sparrows are prodigious breeders, one breeding pair can replace almost all other native birds in an area within a couple of seasons.  And there goes the neighborhood!

We had our first run in with one very territorial male sparrow when he took control of our Purple Martin house.  For two days it was a game of ‘Take The Fort’.  One furious male sparrow would take the house and fend off all comers.  A family of five martins would take it back and hold it for awhile.  Back and forth it went until the relentless sparrow finally won out, and the martins abandoned a 3-story bird condo that was meant for them!

This only makes sense when you realize that a male sparrow is more attached to his house than to his mate.  A male sparrow will find a different mate every year, but will claim and fiercely defend a nesting place year after year!

There are several options to dealing with problematic house sparrows, but none of them are perfect.  A large number of songbird websites and highly regarded bird experts recommend killing house sparrows, and they offer techniques.  House sparrows have no legal protection in the US because they are a destructive invasive species.  Other options include capturing, relocating or wing trimming.  Trying to scare them away rarely works.  Our decision was simply to take down the martin house for the year.  Fortunately, the house sparrow has never returned.

Learn more about the incredible nature in our area by joining a chapter of the Texas Master Naturalist organization.  To find a chapter close to you, or to read about the state program, go online to https://txmn.tamu.edu

Volunteer and get involved!