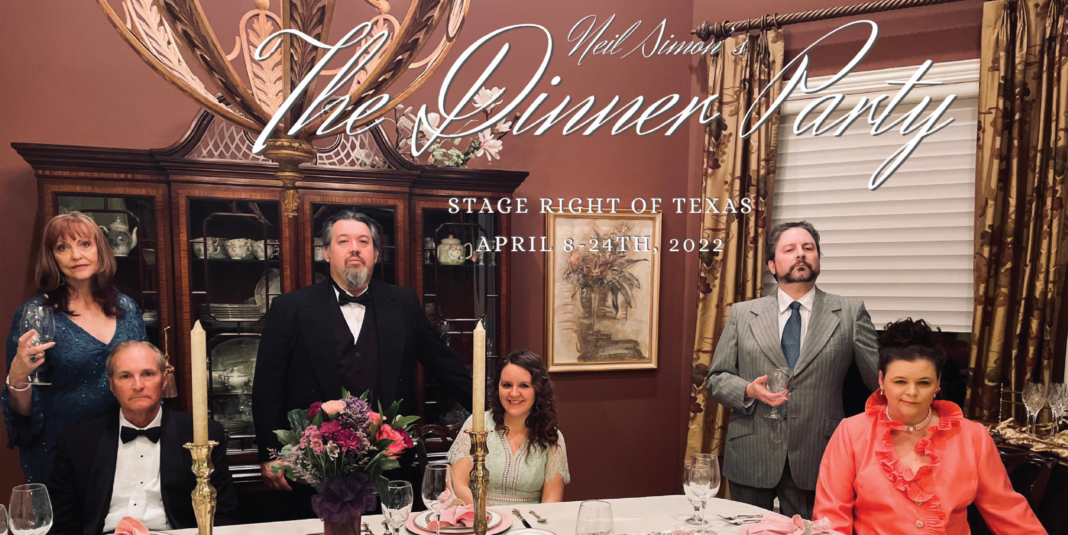 Imagine being locked in a luxury hotel room with your ex, with four other people there watching. Such is the painful situation in Neil Simon’s The Dinner Party, a Stage Right production opening on April 8 at the Crighton Theatre. It co-stars six elegant society people seemingly waiting for Godot and wondering why they’re even there.

‘There’ being Paris, did I mention that? Much gets mentioned in this droll, tense face-off, but little gets spelled out. “I think that’s what the party’s about,” observes one guest. “To figure out what the party’s about.” – Wait, what? The general public was caught off-guard when the play debuted on Broadway in 1990.

But every artist longs to try something different from time to time, to prove himself on rival terrain. Throughout his career, plays of Simon’s type were treated disparagingly, upstaged by a midcentury critical stage theory that judged Simon less oracular than, say, Sartre or Ionesco or Pirandello, his appeal merely popular. He merely made money. 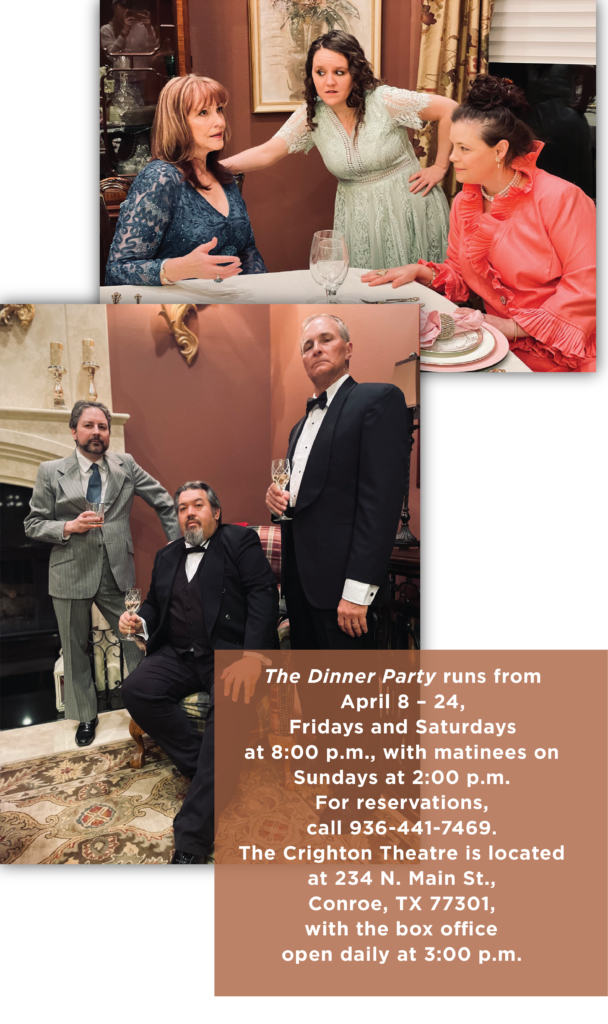 Nearing his career’s end, Simon turns the tables on his detractors, those reigning threadbare modernists – where they mocked everyday life, he mocks existential ennui: six characters in search of a clue. France, in particular was a hotbed of vanguard clichés, from Cocteau to the Exterminating Angel. At this bitter dinner manqué, Simon puts his own spin on glib despair; and, really, who doesn’t enjoy making fun of the French?

The Dinner Party, to all appearances, isn’t a comedy at all, but flirts with a few genres along the way. At first, the setting hints at a murder mystery – three men and three women, strangers to each other, are all invited to an exclusive soirée, but there’s no host. No middlebrow Brooklyn, either; instead, Simon rolls out the full, grand European treatment, lush art and big money, prickly poise and pretension, played out on an over-appointed Cartesian gameboard as “a confrontation of couples.” Rising to the occasion like deft cocktail fencers, they parry and feint, quick wit their weightless weapon, giving no quarter. Bon mots bounce off each other, tirelessly.

To say more would ruin the unfolding of it all. High Parisian culture notwithstanding, Simon’s trademark laughsmanship lightens the mock opera of it all, until the sixth guest arrives and changes everything.

Ultimately, the pièce de résistance proves to be divorce. By this time in life, Simon himself had been married and divorced four times – one wife had died, another one he married and divorced twice – so obviously he knew the subject well, as mirrored in the script. Even when decanting such cool champagne, he drew on his personal history as a vessel for regret. And when the moment comes, as it must, to play the climactic Eurotrashy “truth game,” his answers will jerk more than a few tears.

For urbane material like this, Stage Right has summoned some of its suavest talent; several of them, fittingly, from academia. Johnny Barton, who plays a quirky painter, teaches theatre arts at Lewis School and is a seasoned Shakespearean performer. Husband and wife Shawn and Dina Havrachek are educators as well, both in Humble, she teaching eighth-grade science at Timberwood School and he teaching calculus at Atascosita High School and recently directing Othello for Points North. The Dinner Party is very much a word game, and lawyer Christina Taylor Wood is on hand to untangle all the verbiage. Rob Baker, a longtime veteran of Brazosport Center Stages in Lake Jackson, rounds out this intellectual cast with dry aplomb opposite Stage Right board president Amy Barnet Sowers.

Crackling with aching unspokenness, The Dinner Party is a consummate creation for 30-year Stage Right stalwart Melody Montez, who directs the play, designed the opulent set and lighting, and stylishly costumed and groomed the actors. Praising the play’s gripping marital themes, she says, “Divorce is an alchemical experience. It can bring about honest communication, which is key to reconciliation.”