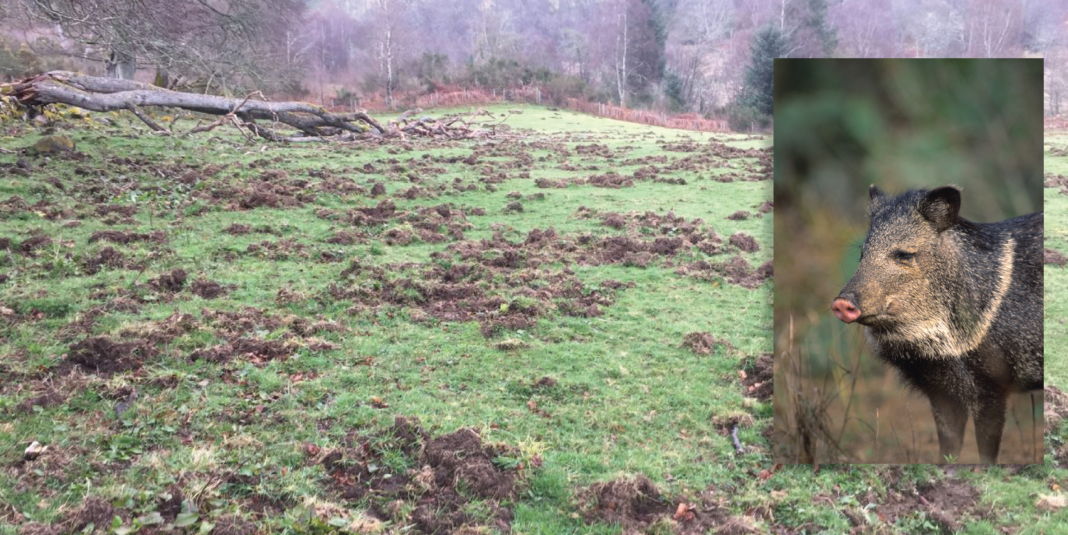 Pigs were first introduced to the United States as free-ranging livestock by Spanish explorer Hernando de Soto in 1539 when he landed at the Florida coast. Some of the pigs escaped and became feral.

Wild pigs are considered an invasive species and one of the most destructive and dangerous species in the USA. Invasive species have two main characteristics: they are non-native to the ecosystem and their existence causes or is likely to cause harm to the environment or human health. Wild pigs can be found in at least 35 states. Currently, the wild pig population in the USA is estimated to be over 6 million. Texas Parks and Wildlife estimate there are over 1.5 million in Texas making Texas the state with the highest population. Sows average between five and six pigs per litter and have an average of 1.5 litters per year.

Hogs have four tusks, two on top and two on the bottom, that are used for defense. The lower tusks are referred to as cutters. They’re very sharp at the tip and are used to tear into a rival or predator. The upper tusks are called whetters (taken from the word “whetstone”, a sharpening tool) because these tusks help to sharpen the lower tusks. They leave a path of destruction in their search for food.

Feral hogs will use their tusks, snouts and hooves to tear up the ground in search of food. They are omnivores They eat grubs, worms, roots, nuts and small insects. I’ve even read that they will kill and eat fawns. They are nocturnal so you may never see them but the damage they leave behind will let you know they’ve been there.

In addition to destroying fields and yards in search of food, wild pigs carry transmittable and zoonotic diseases. Some of them are rabies, swine brucellosis, and E. coli bacteria. Domestic pigs, humans, and pets can catch these wild hog diseases.

During the summer of 2021 I, as well as many of my neighbors, experienced firsthand the damage they can do. Our lawns looked like they had been recently plowed and my sprinkler system was damaged. This happened numerous times. I researched how to get rid of them and came up empty handed. One article I read said to remove their food source. Well, I can’t remove my lawn! The article also said that pigs can be hunted. That’s wasn’t going to happen. The solution for me was to fence my yard. Ten thousand dollars later, the problem was resolved.

If you’re dealing with wild pigs, all I can say is that I feel your pain! They are indeed a nuisance.