For the month of July, we wanted to honor a uniquely American animal; the opossum!  Of all the native wildlife we care for, the opossum seems to be the one that is most misunderstood, or even feared. Opossums are beneficial animals to have around for many reasons, and they are docile, gentle creatures.

The opossums we have in North American (often called “possums”) are Virginia Opossums, and they are not found anywhere else in the world.  They are quite unique because they are the only marsupial animal native to North America.  Marsupial animals (or non-placental animals) raise their babies in a pouch, just as kangaroos do.  Only the female opossums have a pouch.  When baby opossums are born, they are furless, blind, and about the size of a honeybee.  They need to crawl up the mother opossum’s fur and into her pouch, where they latch onto one of her thirteen nipples.  Once they have latched on, the nipple swells and the baby is then attached.  They don’t suckle to drink, but rather the mother’s milk slowly leaches out, kind of like an opossum drip-irrigation system.  If a baby either falls out or is knocked out of the pouch at this age, they need to be tube fed since they have no natural sucking reflex as other baby mammals do.  As with other pouch-raised babies, the baby opossums remain in the pouch as they continue to grow and mature.  They first venture outside of the pouch when they are between two to two and a half months old (their eyes open and they have fur at about two months of age, at which point they are about the size of a mouse).  Opossums are very good mothers, and they are very protective of their young.  Once the babies emerge from her pouch, they often ride along on her back while she forages for food, and they begin to eat solid food at about three months old.  Once the babies are weaned, about six inches long (without their tail), and their ears are almost solid black, they are old enough to fend for themselves.  At this point, it is “tough love” opossum style; mama opossum will simply brush against something to knock the babies off her back and away she goes.  She’s dedicated for as long as she needs to be, but when she’s done, she’s done. 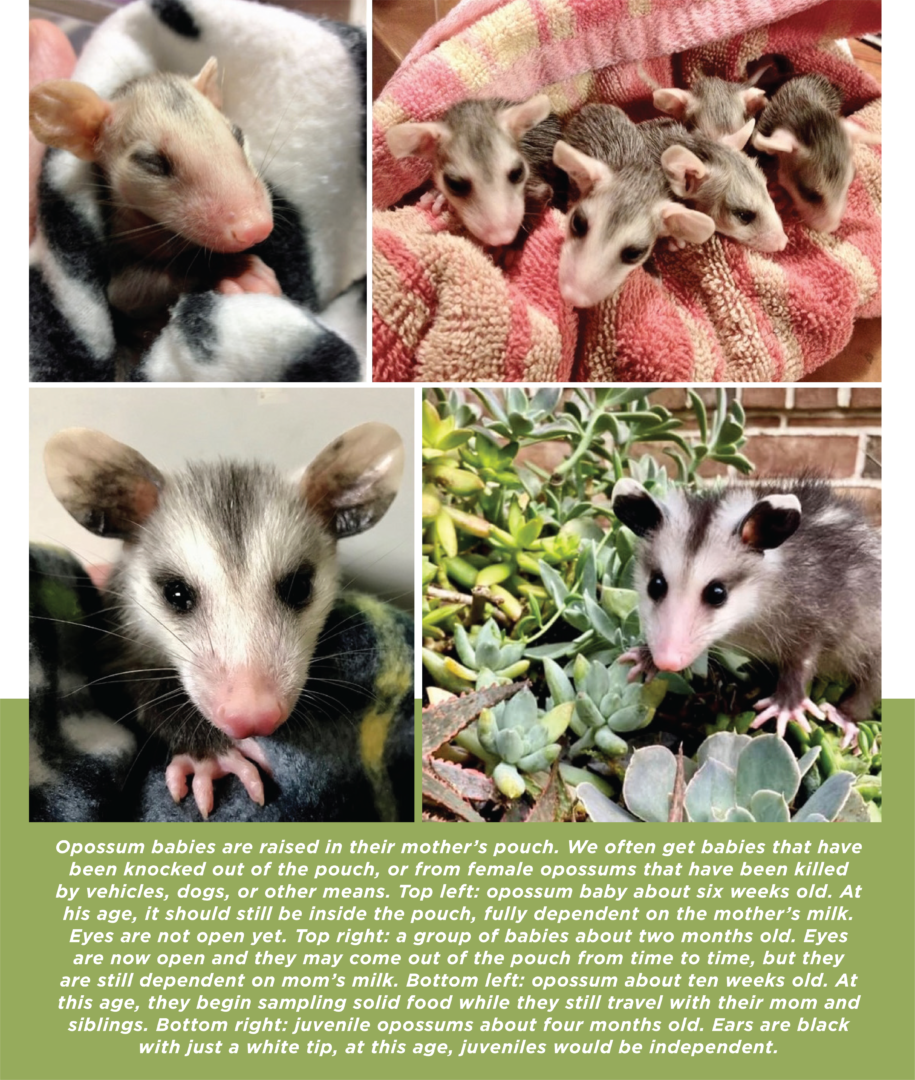 Opossums are nocturnal scavengers.  They move from place to place in search of good food sources and a comfy place to sleep, so they are more transient than territorial. They are attracted to carrion and can often be spotted near roadkill, which is helpful for keeping diseases out of the environment.  As omnivores, opossums also eat grass, nuts, fruit, and they will also consume mice, insects (including roaches), worms, slugs, and snakes, including venomous ones.  Thus, they are beneficial for helping to control the overpopulation of snakes, rodents, and insects.  Opossums are largely immune to snake venom.  In lab experiments, it has been discovered that a particular molecule (called a peptide) in the opossum’s blood can neutralize snake venom.  The peptide works against several venomous snake species, including rattlesnakes, copperheads, and cottonmouths.  Studies are being done to see if this peptide could be mass produced to be used as an inexpensive and universal anti-venom for human snake-bite victims.

Opossums are fastidiously clean, very cat-like in their grooming routine.  If they find a tick in their fur, they lick it off and swallow it.  It is estimated that in one season, an opossum can kill and consume about 5,000 ticks.  More than 90 percent of ticks on an opossum end up being groomed away and eaten.  This could have implications in preventing certain tick-borne diseases (including Lyme disease) in domestic pets and humans.  In areas where there is a healthy opossum population, this can help to control the overpopulation of ticks, thereby keeping the ticks away from us and our pets.  The opossums do not seem to be affected by these tick-borne illnesses.  Opossums have a naturally low body temperature (94-97°F).  This feature makes them much less susceptible to viruses other diseases that can affect wildlife animals (such as distemper).  Although technically any mammal can get rabies, the chance of rabies in an opossum is EXTREMELY RARE.  Even although they have a reputation of being dirty, disease-ridden animals, that is patently false.

Opossums have some interesting features which make them quite unique in the animal world:

• Our native opossum, the Virginia opossum, is only found in North America.  Although other parts of the world have animals called opossums (such as Australia), they are a different species.

• Opossums seem to be flourishing due to their natural ability to adapt to different situations and habitats.  They fare quite well in rural, suburban, and even urban areas.

• Adult opossums cannot hang from their tails, but they do have prehensile tails (much like chameleons) which they use to help grip and balance when climbing trees or while walking along fences.  Opossums have been observed carrying bundles of grasses and other materials by looping their tail around them; this conscious control leads many to consider their tail as a fifth appendage, like a hand.

• The opossum has opposable “thumbs”, although they are located on its rear feet (so, technically they’re toes), which adds to its formidable climbing skills.  Primates and opossums are the only mammals with opposable first toes.

• When opossums “play possum”, they are not “playing dead”; but rather the opossum has an involuntary comatose-like state induced by extreme fear (so basically, they faint).  This state can last from several minutes to several hours.  While “dead,” the opossum’s body is limp, its front feet form into balls and drool runs out of its mouth. It may even appear that rigor mortis has begun.  Once the danger has passed, and the opossum “comes to” again and goes on his way.

• Opossums have a relatively short life span for an animal of its size.  In the wild, they generally only live an average of three years.  Many are killed by cars, dogs, owls, and larger wildlife.

• Opossums have more teeth than any other mammal; they have 50.  Although they may snarl and bare their teeth if cornered, they generally just want to be left alone and will quickly scurry away once the opportunity presents itself.

To learn more about what we do and view pictures of many of the animals we assist, please visit our Facebook page at www.facebook.com/SavingTexasWildlife. Details and more specifies-specific flowcharts regarding how to help found animals can be viewed on our website at www.ftwl.org (click on “Help and Advice”). These charts are extremely helpful to determine if an animal truly needs rescuing or not.  If you need assistance with a wildlife animal you have found, please call us at 281-259-0039 or email us at [email protected] We offer many educational programs (including camps, birthday parties, educational presentations, and Second Saturdays). Our educational visitor’s center is open the second Saturday of each month from 10 a.m. to 2 p.m., located at 29816 Dobbin Hufsmith Road, Magnolia, Texas, so our next Second Saturday will be on July 9 ($5 per person, kids three and under are free).