Stage Right: Murder on the Orient Express & The 22-23 Lineup!

Stage Right: Murder on the Orient Express & The 22-23 Lineup!

Agatha Christie’s Murder on the Orient Express opens the new Stage Right season on September 9 and runs through September 25. Imagine being stranded by a snowdrift blocking the Orient Express in its tracks. The luxurious train is surprisingly full for the time of the year, but by morning it is one passenger fewer. An American tycoon lies dead in his compartment, stabbed multiple times, his door locked from the inside. Isolated and with a murderer in their midst, the passengers rely on detective Hercule Poirot to identify the murderer before he or she can attack again. Directed by Amber Babcock with costumes designed by Marieda Kilgore and set design by John Barton.

Rent, directed by Manny Cafeo is scheduled for October 21-November 6. Rent follows a year in the life of impoverished young artists and musicians struggling to survive and create in New York’s Lower East Side, under the shadow of HIV/AIDS. The physical and emotional complications of the disease pervade the lives of Roger, Mimi, Tom and Angel. Maureen deals with her chronic infidelity through performance art; her partner Joanne wonders if the relationship is worth the trouble. How these young Bohemians negotiate their dreams, loves and conflicts provides the narrative thread to this groundbreaking musical. (Strong adult themes)

December brings Spamalot, the legendary tale of King Arthur’s quest to find the Holy Grail inspired by the classic comedy film Monty Python and the Holy Grail directed by Tina Cafeo. The show runs December 2-December 18. Spamalot features shenanigans including a line of dancing girls, flatulent Frenchmen and killer rabbits. Spamalot is sure to leave people rolling with laughter!

In the Heights runs from February 10-26, 2023 and is directed by Cricket Pepper. Written by Lin-Manuel Miranda, who wrote Hamilton and is the composer of Encanto, it tells the universal story of a vibrant community in New York’s Washington Heights neighborhood which carries the rhythm of three generations and reveals a community on the brink of change. Residents are pondering which traditions will remain and which will be left behind.

The much beloved Shakespearian comedy, Much Ado About Nothing will take the stage April 7-April 23 and is directed by Melody Montez. The play is set in Messina and revolves around two romantic pairings that emerge when a group of soldiers arrive in the town. Does the course of love run true or will these couples be torn apart?

The final offering of the season is The Little Mermaid directed by Sara Preisler. Based on one of Hans Christian Andersen’s most beloved stories and the classic animated film, Disney’s The Little Mermaid is a hauntingly beautiful love story for the ages. This fishy fable will capture your heart with irresistible songs including “Under the Sea” and “Kiss the Girl” and the humor of Flounder the fish and Scuttle the Seagull.

PLEASE NOTE: This season our evening shows will begin at 7:30 instead of 8:00.

Season Tickets are available for all six shows for only $125.

Contact the Crighton Theatre box office at (936) 441-7469 to buy yours today. If you have season tickets, you can exchange them for another date if you have a conflict at no extra charge. 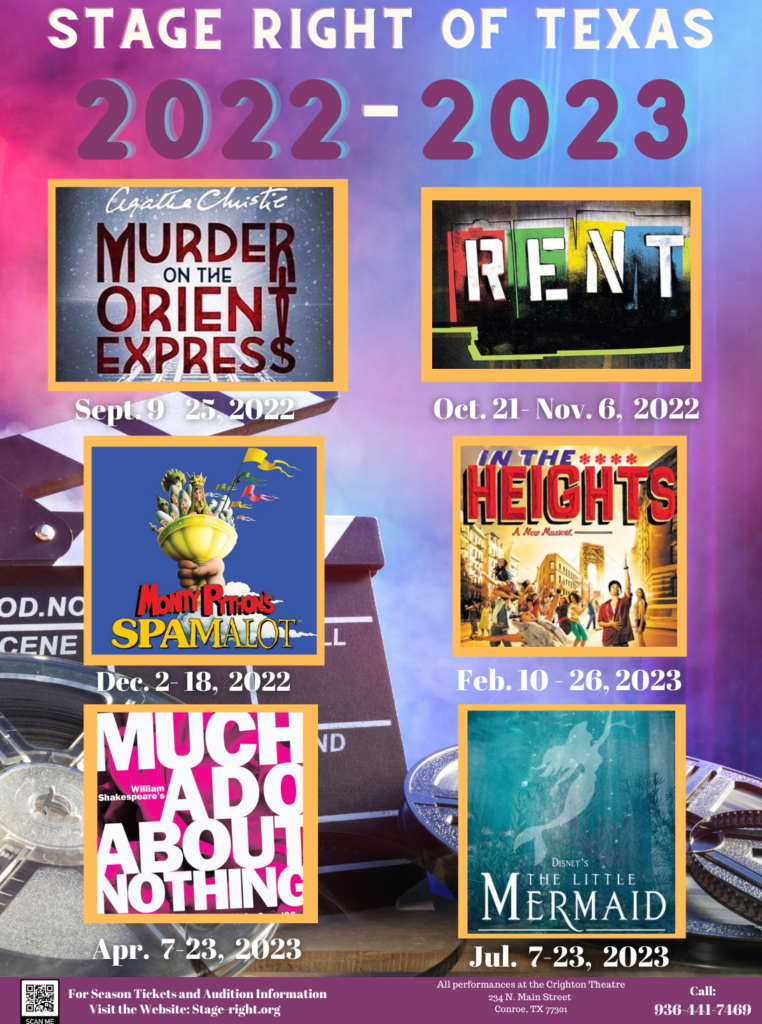