Totally 80s, The Musical is a totally tubular comedy musical that follows a group of friends who come of age during the 1980s, when Ronald Reagan was president, the Berlin Wall came down and the hits of Madonna, Journey, Sting, Whitney Houston, Duran Duran and Michael Jackson filled the airwaves. This high-energy show features a neon-colored combo of comedy, nostalgia and a fantastic soundtrack of top ‘80s music including hits like “Danger Zone,” “Material Girl,” “I’m So Excited,” “Manic Monday,” “Time After Time,” “Don’t Stop Believin’,” and “Thriller,” among many other hits by Cyndi Lauper, The Bangles, Rick Springfield, Huey Lewis, Billy Joel, Whitney Houston, and more!

National Youth Theater (NYT) will be the first to perform this show in the great State of Texas!

Whether this takes you back to your childhood or just a younger adulthood, Totally 80s, The Musical defines an era through its music. This show features a very-talented cast of ages 12-19 that will blow you away with incredible voices, sweet harmonies, and iconic dancing (Thriller, Rhythm Nation, Beat It… just to name a few).

Like anything NYT produces, it’s family-friendly, but this one is even better for a group of friends. Especially if you ever had a Duran Duran poster on your wall!

Jean jackets and spandex leggings, big hair, bangles, leg warmers, and ripped jeans will be all the rage at the rocking performances of Totally 80s, The Musical! Get your tickets and journey back to the 80s!

Totally 80s, The Musical opens on November 11 at Concordia Lutheran High School located at 700 E. Main Street in Tomball with performances through November 13. Purchase your tickets online at nationalyouththeater.org/ticketing.

Narnia; a musical dramatization of The Lion, The Witch, and The Wardrobe

Step into another world as NYT presents Narnia, a musical dramatization of The Lion, The Witch, and The Wardrobe, the first in British author C.S. Lewis’ world-renowned series, The Chronicles of Narnia.

The most famous story of the Chronicles of Narnia has become a musical presentation of this unique, enchanted world filled with creatures and spirits of myth and fable, both good and evil, dark and transcendent. Narnia, a book by Jules Tosca, music by Thomas Tierney, and lyrics by Ted Drachman, tells the story of four schoolchildren who unexpectedly plunge through a magical wardrobe into a glistening forest kingdom of perpetual winter… a fairy tale with magic swords, potions, and exotic forest creatures that range from a benign pair of beavers to the famished hissing Cruelies who serve the wicked queen.

The Pevensie children discover that they have a destiny to stand with Aslan the Lion to free Narnia from the deadlock hold of evil winter that the White Witch has cast upon the land. However, many obstacles of treachery, betrayal, and evil magic threaten to undo them along the way.

Starring a cast of young actors ages 8-19, this incredible cast has crafted a musical theatre experience that is a gift to the arts community. Entertainment that the entire family will enjoy! 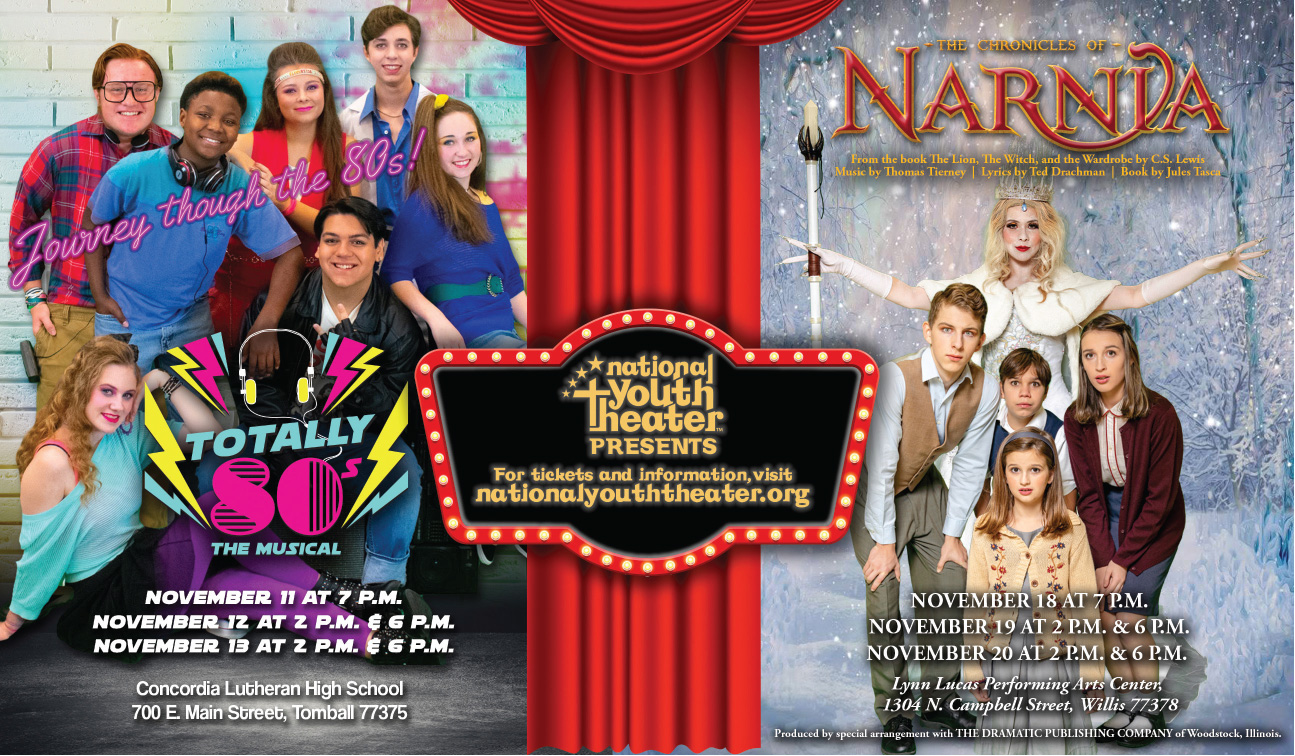