OK, if we’re being honest, this month’s featured animal isn’t exactly known for being beautiful.  How often have you heard anyone utter the phrase “Wow!  Look at that GORGEOUS vulture!”?  Although they can strike fear in the hearts of the uninformed, vultures really are beautiful in their own way.  They are highly adapted to serve their purpose as nature’s sanitation workers.  They play a crucial role in the environment by scavenging on the carcasses of dead animals, thereby helping to keep ecosystems clean, healthy, and free from diseases.

We have two different species of vultures in our area:  the Turkey Vulture and the Black Vulture.  Although they have many physical similarities, there are some distinctive differences in appearance and behavior. 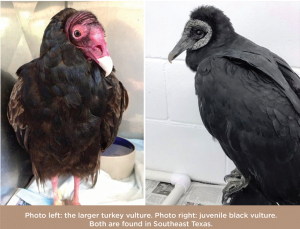 The slightly smaller of the two species is the Black Vulture.  Black Vultures have black or dark gray heads (devoid of feathers), and their plumage is a dark, fairly-uniform, inky black color.  When seen in flight, the wingtips of the Black Vulture are white, and their wingspan and tail are somewhat shorter than that of a Turkey Vulture.  Black Vultures also tend to fly with their feet hanging down, as opposed to Turkey Vultures who fly with their feet tucked tight against their body.  Black Vultures are more aggressive feeders than Turkey Vultures, and they often will chase the slightly larger Turkey Vultures away from carcasses.  Black vultures feed almost entirely on carrion.  They depend on their keen eyesight to help them find food, locating it by soaring high in the skies on thermals.  By circling high up, they can spot carcasses and to keep an eye out for Turkey Vultures (which have a more keenly developed sense of smell to locate carrion), which they will then follow toward food.  Black vultures eat most types of carrion and roadkill and will occasionally even wade into shallow water to feed on floating carrion or to catch small fish.  Since they are aggressive feeders, though, they will occasionally kill small mammals or livestock, including young pigs, lambs, and calves. They have also been observed feeding from dumpsters and landfills.

Black Vultures nest in dark cavities such as caves, hollow trees, abandoned buildings, brush piles, thickets, and stumps, and they may use successful nesting sites for many years.  One to three eggs are laid directly on the ground, and incubation is about 38 days.  Although the young will fledge after about 2-1/2 to 3 months, the parents feed their young for as many as eight months after fledging.  Black Vultures maintain strong social bonds with their families throughout their lives, often roosting in large flocks in the evening.  These communal roosts serve as a meeting place for foraging groups and allow adults to reconnect with their young.

Black Vultures aggressively prevent nonrelatives from joining them at roosts or following them to food sources.  Sadly, as vultures often feed on roadkill, they commonly get hit by vehicles.  We often get calls on vultures that are found unable to fly due to injuries.  The best advice we can give is that if the vulture is clearly suffering (has been observed on its own with no other vultures nearby; cannot stand or walk; has a wing injury so severe it is dragging or stepping on its own wing), then a rehabber should be called.  However, if a bird seems to be getting around ok (even if not flying), and it is observed in the company of other vultures (which would be “family” members), then it should be left alone and with its family group.

The larger of the vulture species in our area are the Turkey Vultures.  These impressive birds have red heads, also devoid of feathers (hence the name “turkey” vultures). 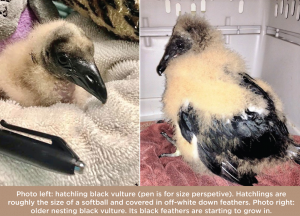 Although Turkey Vultures from a distance appear black in color, their plumage is made up of black and dark brown feathers.  Turkey Vultures depend on their sense of smell to help them locate food.  Their diet consists mainly of mammals, but they will occasionally eat reptiles, other birds, amphibians, fish, or invertebrates.  Unlike their more aggressive Black Vulture relatives, Turkey Vultures almost never attack living prey.

The nesting habits of the Turkey Vulture differs from that of the Black Vulture.  Turkey Vultures nest in rock crevices, caves, ledges, thickets, mammal burrows and hollow logs, fallen trees, abandoned hawk or heron nests, and abandoned buildings.  They prefer nest sites that tend to be cooler than their surroundings, and more isolated from human disturbance.  They do not build full nests, but they may scrape out a spot in the soil or leaf litter.  Once a suitable and successful nesting site has been found, it may be used repeatedly for a decade or more.  They lay one to three eggs, which are incubated for anywhere from 28 to 40 days.  The young stay in the nest for 60 to 84 days, and both parents tend to the young.  Pairs are monogamous and may stay together for many years.  Outside of the breeding season, Turkey Vultures gather in roosts numbering from dozens of birds to over a hundred birds; migrating flocks can number into the thousands of birds.

Although vultures are considered raptors, they are in fact more closely related to storks.  Fun fact…like its stork relatives, vultures often defecate on their own legs, using the evaporation of the water in their feces to cool themselves (ok, we know it’s hot here, but don’t try that at home).  Thankfully for them, vultures appear to have excellent immune systems, happily feasting on carcasses without contracting botulism, anthrax, cholera, or salmonella.  Although they may not win any beauty contests, and their “social skills” may not be the most attractive, they are good to have around, and they serve a unique and beneficial purpose in a healthy ecosystem.

To learn more about what we do and view pictures of many of the animals we assist, please visit our Facebook page at www.facebook.com/SavingTexasWildlife.  Details and specifies-specific flowcharts regarding how to help found animals can be found on our website www.ftwl.org (click on “Help and Advice”).  These charts are extremely helpful to determine if an animal truly needs rescuing or not.  If you need assistance with a wildlife animal you may have found, please call us at 281-259-0039 or email us at [email protected]   Our educational programs (including camps, birthday parties, educational presentations, and Second Saturdays) have resumed.  Our educational visitor’s center is open the second Saturday of each month from 10 a.m. to 2 p.m., located at 29816 Dobbin Hufsmith Road, Magnolia, Texas, so the next open house date will be Saturday, August 14 ($5 per person, kids 3 and under are free).