“Summer Nights” in Downtown Conroe Heating up as Grease: The Musical Quickly Approaches!

“Summer Nights” in Downtown Conroe Heating up as Grease: The Musical Quickly Approaches!

“Summer Nights” in downtown Conroe heating up as Grease: The Musical quickly approaches! It’s less than a month until Stage Right’s summer musical Grease opens, and the Crighton Theatre is shaking with excitement! The hit Broadway musical, created by famed duo Jim Jacobs and Warren Casey, boasts a hip-shaking rock-and-roll score and features hits like “Summer Nights”, “Greased Lightnin’”, and “We Go Together”. 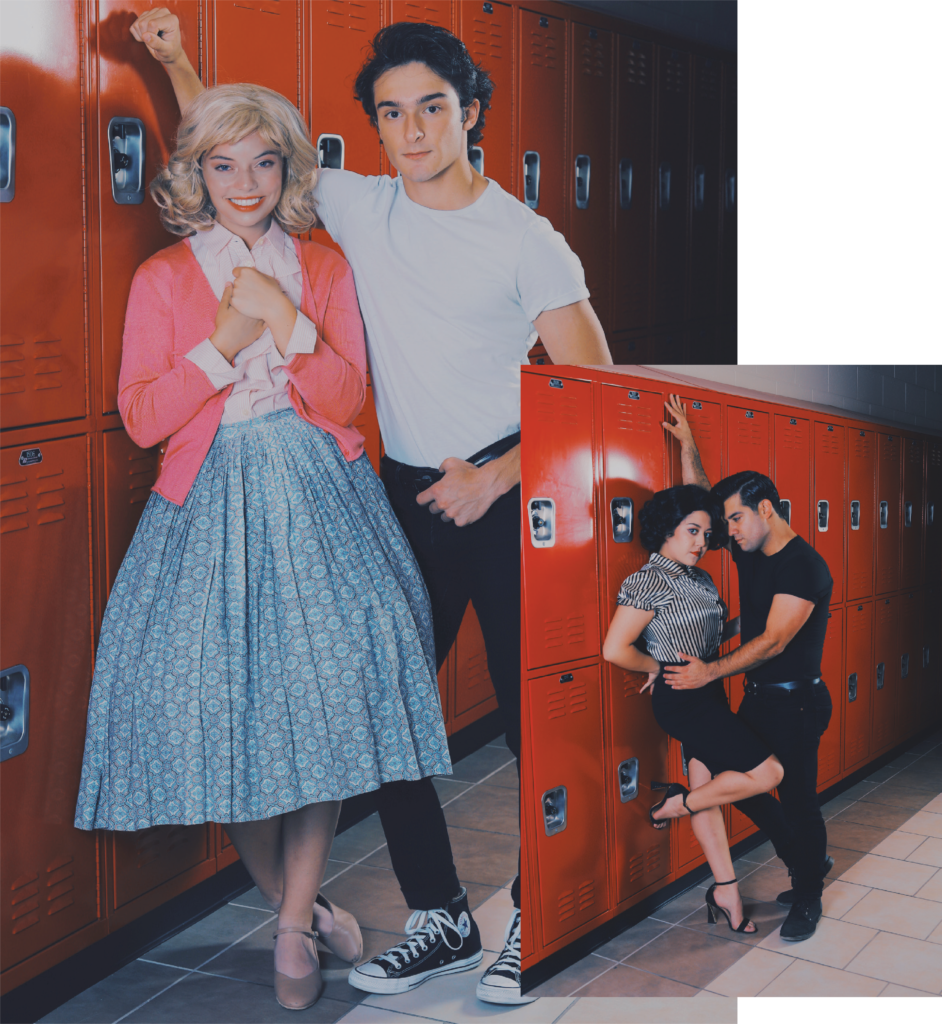 Grease celebrates Rydell High’s Class of 1959 in all their duck-tailed, bobby-socked, gum-snapping glory. After an eight-year run on Broadway and two subsequent revivals, along with countless school and community productions, Grease has become a classic and remains one of the world’s most popular musicals. This time, we thought we would highlight some of the key cast members who help make Grease the amazing show it is!

One of the more eye-catching members of the cast is dance captain Ellie Williams. Williams stands out, possessing both strong dance skills and a willowy 5’9” frame. I was once told the best compliment you can give a performer is that their training shows, and Ms. Williams’ training is apparent. “With a show like Grease, where all of the songs and dances are so iconic and well known, it’s important to make sure that we as a cast do our best to bring the audience a show that will live up to the movie or Broadway production.” Williams continued, “however, this production of Grease has been so different because every number in our show always goes above and beyond what the audience will expect it to be. With captivating choreography that is so hard hitting and nothing like I’ve ever seen in a production of Grease, there’s never a dull moment in any number. It will keep the audience feeling as if they don’t know where to look because of all the dynamics going on around the stage.”

Another talented dancer in this show is Ren MagDaleno. Mr. MagDaleno is a powerful presence on stage and is easily identifiable by the passion he exudes in all the dance numbers. As a new member of Stage Right, Ren has proven himself a valuable asset to the company. With his only experience in school plays, MagDaleno has this to say about his new theatre family, “They are so welcoming. As a group, they have really raised my personal standards as a performer. I have loved getting to know my cast mates. This show has opened the door on opportunities for my future.” A case could be made for Ashling DeGraaf as the most energetic person onstage. Ms. DeGraaf was recently accepted into Baylor University’s Theatre Arts school, and portrays head cheerleader (and teacher’s pet) Patty Simcox. Ashling is a team player who brings 110% to everything she does. When asked how working with Stage Right has been, she said, “It has been amazing, super stressful. This group has forced me to stay on my toes. I’m a planner but I have learned to expect the unexpected. It has really forced me to evaluate all the little choices I make as an actor.” Another key member is talented soloist Robben Montez, who portrays rock & roll band leader and teen heartthrob Johnny Casino. He excels at singing the tongue twister of a song, “Born to Hand Jive!” while simultaneously performing some of the most difficult choreography of the show. When asked how he prepared to be an Elvis wanna-be, Robben said, “I’ve had teen idols around my home all my life. My brother is really into 1950s rock and roll, so I grew up listening to the Big Bopper and Buddy Holly. We actually used to dress up as Elvis when we were little and perform” 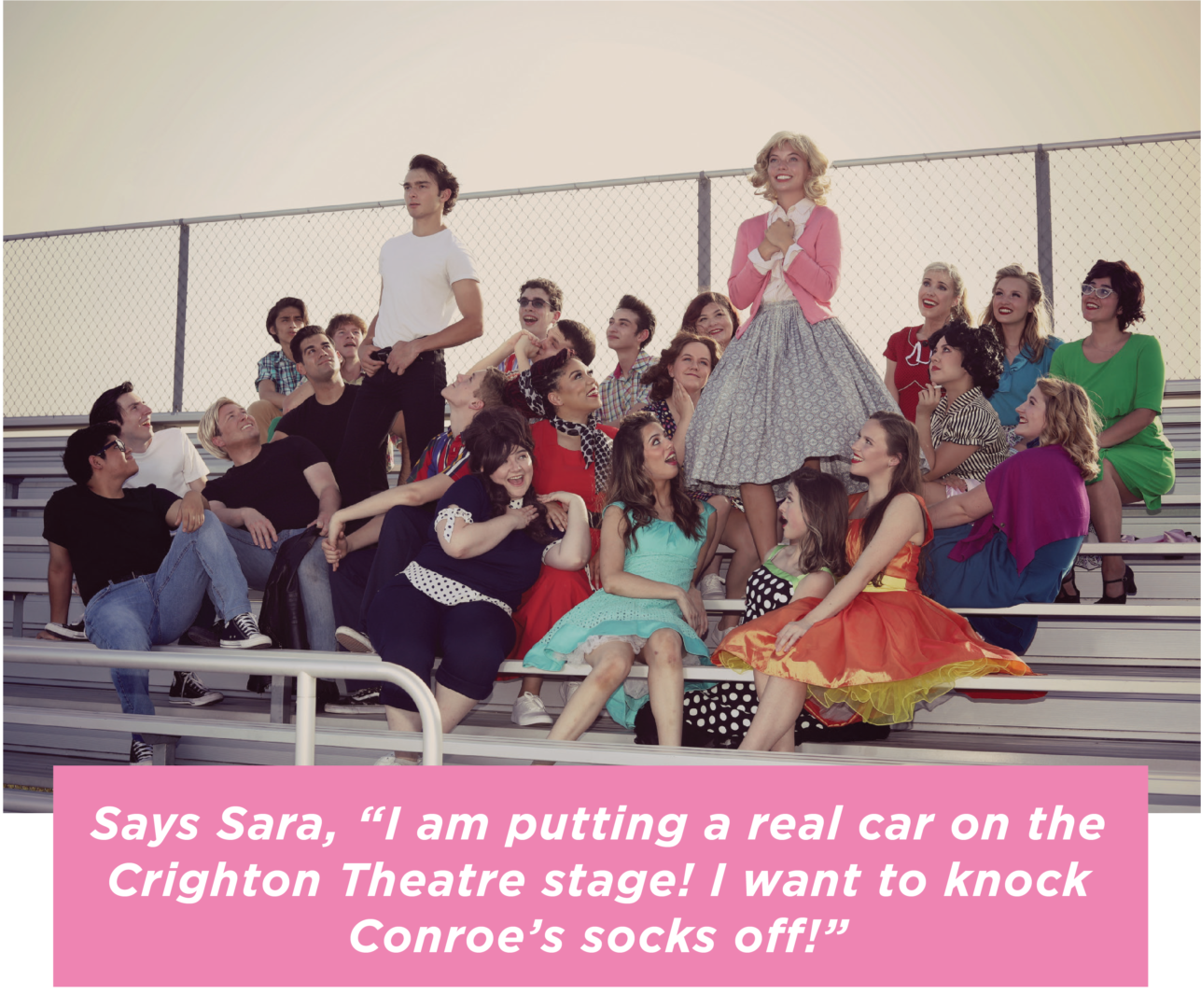 Next up is triple-threat Gracie Lara. Ms. Lara can do it all: Acting! Dancing! Singing! Gracie does a spectacular job as Marty, the Pink Ladies’ expert on all matters of boys and alcohol. Lara is another new face at the Crighton. She is excited to be onstage after taking a few years off. “It’s been great, I’m having a great time. I’m glad I got to perform here.” She thanks the cast for making this experience positive “I’m happy to get to meet new friends.”

Funny man Kyle Clevenger portrays Sonny LaTierri, an (incorrectly) self-imagined Casanova. Clevenger, making his Stage Right debut, finds theatre to be a family affair. Not only is his fiancé, Madison Mapes, in the show, but his new son Atticus has attended several rehearsals. When I asked how having an infant at home has changed his acting process, Kyle had this to say, “I don’t have as much time as I used to; having a baby is a 24/7 job! The main thing is finding time to practice.” When asked what makes it worth it, he answered, “Meeting new people – most of my friends I’ve met through theatre.”

I also managed to catch up with Grease director Sara Preisler. Well known to Conroe audiences, Ms. Preisler is not only the director, but also the choreographer, set designer, and Artistic Director of Stage Right (though she prefers the title “Chaos Coordinator”). When asked how her production of Grease would be different, she smiled mischievously. “I’m doing a lot of things differently. I am making this show very dance heavy. Oh, and lots of glitter, I have a reputation after all.” But out of everything in the show, her proudest accomplishment is the production number “Greased Lightnin’!” Says Sara, “I am putting a real car on the Crighton Theatre stage! I want to knock Conroe’s socks off!”