Historically called buzzards, the vultures we most often see in our area are either turkey vultures or black vultures. You see them everywhere, pecking at dead fish on a river bank or snacking on roadkill.  These big uglies are the local clean-up crews and they do us a great service.  But they can also be a problem.  We’ve all had to slow down for vultures dining in the roadways because they can fly up and take out a windshield!

Turkey vultures are large birds with a height of 2-1/2’’ and weight of around 5 lbs.  The red turkey-like gobbler head is a dead give-away for identification, although immature birds have gray-black heads.  These big boys also have a defining line of brown-beige feathers along their underwings which is easy to spot as they circle overhead.  Because they have exceptional olfactory abilities, turkey vultures can smell the indelicate gases of their next dead meal from a great distance.  Their 6’ wingspan allows them to circle effortlessly on high thermals, sniffing for something tasty. 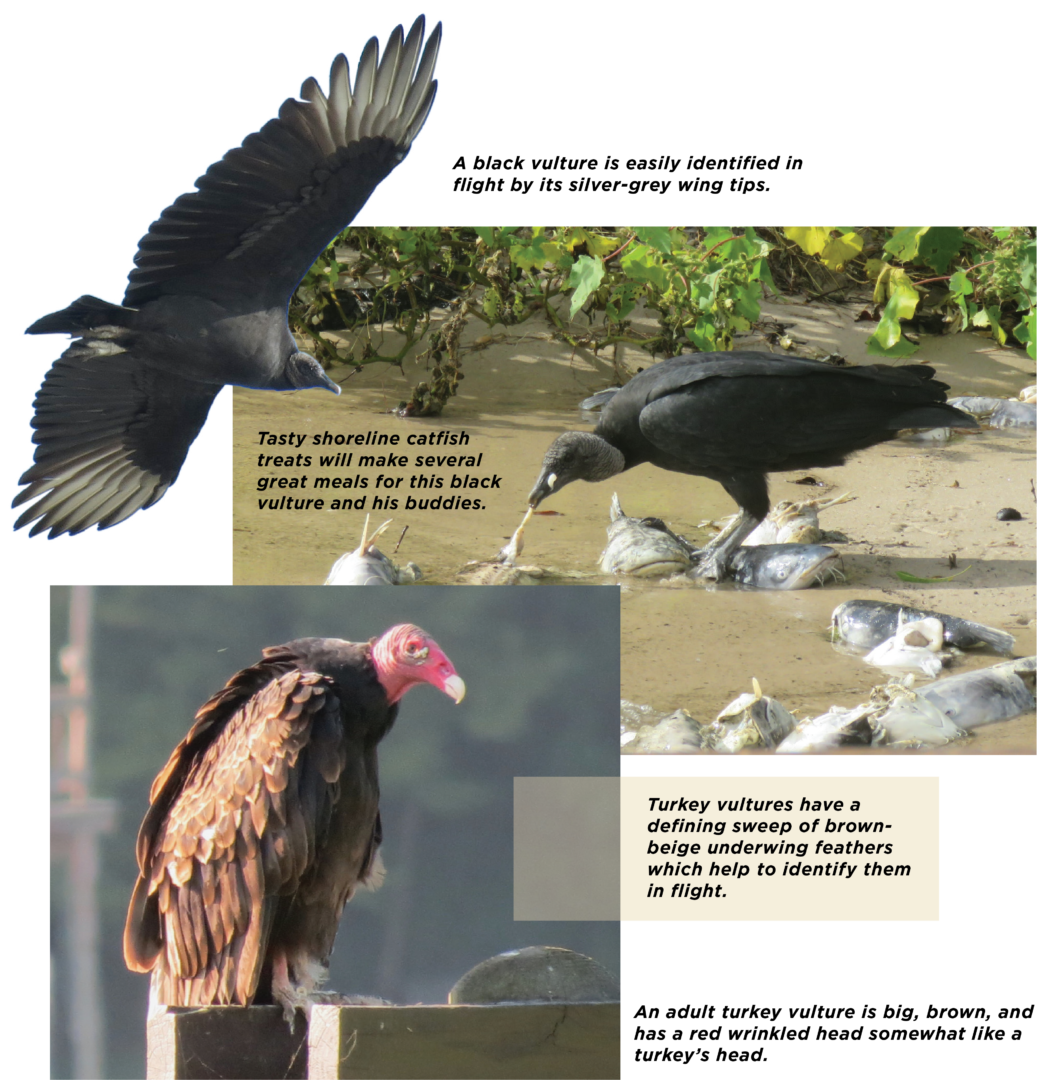 Black vultures are slightly smaller than turkey vultures.  They have darker wings and bodies, and light white legs and claws.  Easily identified in flight, they have silver-grey feathers on each wing tip.  These birds do not have the turkey vultures’ amazing sense of smell so they often follow turkey vultures to steal their meals!  In general people don’t like the nastier black vultures.  They sometimes kill newborn animals such as calves and fawns, sending them into shock by pecking them.  They will often sit on branches below heron and egret nests, grabbing the fallen chicks.  If there’s an uncovered boat or jet ski with leather cushions, they have been known to destroy these crafts by totally shredding the cushions for nesting material!

These two types of vultures rarely intermingle.  For the most part they stay separate; roosting, flying and dining in their own individual flocks.  No lovely warbling or chirping comes from any of these fellows.  Appropriately, they only hiss or grunt!  And nothing much will prey on either type of vulture because nothing wants to eat them. Their stomach acids are so strong that they can consume botulism, anthrax, and many other bacteria and parasites without becoming ill!   And if they are threatened, they vomit up a foul mess!  Perhaps this lets them fly off from enemies by carrying lesser weight, or maybe it just disgusts their enemies.

Vultures are federally protected by the Migratory Bird Treaty Act.  People are not allowed to kill, possess, harass or harm them, or their nests and eggs.  However, when colonies roost in places where they are not wanted, such as on roofs, cell towers, or docks, people can gently encourage them to move by using balloons, scarecrows, or loud noises.

Learn more about the incredible nature in our area by joining a chapter of the Texas Master Naturalist organization.

To find a chapter close to you, or to read about the state program, go online to https://txmn.tamu.edu    Volunteer and get involved!